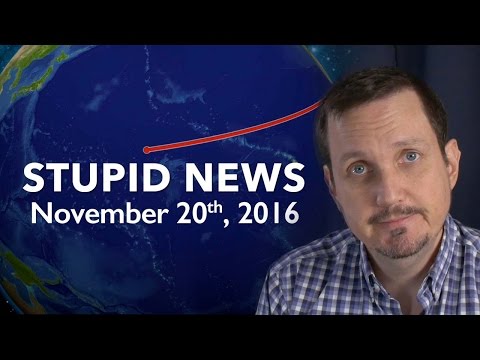 Hi, I'm Ian Dukes and this is the Stupid News This week Alaska Airlines made history by completing the first commercial flight where the plane was powered by wood chips

Passengers were allowed to bring one carry on, one personal item, and one rack of ribs Famous physicist Stephen Hawking said tuesday that a global catastrophe will eradicate humanity in less than a thousand years Or to be more specific january 20th 2017 The Oxford Dictionary has named "post-truth" the 2016 word of the year No they didn't

Experts say the website Adult FriendFinder has been hacked, exposing the data of over 400 million users Ironically for those users their data was the only thing they hadn't exposed Earlier this week a judge ordered that Brendan Dassey, the young cousin of Steven Avery from Making a Murderer, should be released from prison He seemed to be in good spirits and said he's hoping he can still get back to class for fifth period Then on thursday the judge blocked his release

Yeah, unfortunately just as Brendan was all set to leave, he accidentally confessed to shooting JFK And now for something even stupider Donald Trump announced he's planning to go on a victory tour and visit only the states where he won The tentative slogan for the tour is Divided We Gloat On Monday tens of thousands of dead fish washed up on Long Island

Along with the remains, authorities found a suicide note and an "I'm With Her" bumper sticker The chief of the LAPD announced that his department will not help Donald Trump deport undocumented immigrants The chief said it's not our policy to turn people over to Homeland Security We'll beat them ourselves Earlier this week Senator John McCain let Donald Trump know how he feels about Vladimir Putin, calling Putin a former KGB agent who has plunged his country into tyranny, murdered his political opponents, invaded his neighbors, threatened America's allies, and attempted to undermine America's elections

Trump responded "Shut up" "You had me a tyranny" Finally this week a global organization of meteorologists say that 2016 is on track to be the hottest year ever recorded And even though he doesn't believe in climate change, even Donald Trump says 16 is hot And that's all the stupid news i can stand

I'm still Ian Dukes and i will see you next time