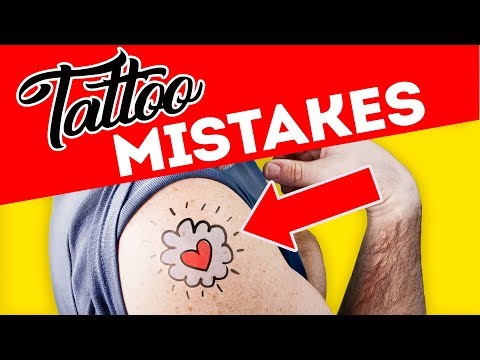 7 STUPID Tattoo Mistakes Men Make [0:00:00] Antonio: Tattoos have been worn by men for thousands of years They can help others perceive you as more masculine, aggressive, and dominant

They aren’t for everyone, but if it fits your aesthetic, they’re a great way to augment your style It’s important to remember though that tattoos are rather permanent, removing them is costly, painful, and not always effective So, when you get at tattoo, you want to make sure it’s done right and make sure it’s something that you’re going to be happy with for years to come In this video, I’m going to cover seven tattoo mistakes Tattoo mistake number one

I get it, you’ve been going out with this new girl for a few weeks and she is everything you’ve ever wanted You’re going to get her name tattooed on your body as a sign of undying love for her Hold up now, you’re about to make a serious mistake Statistically, tattoos last longer than most relationships, so if or when this perfect relationship ends removing that tattoo maybe more painful and difficult than the actual breakup Tattoo mistake number three

Going for a trendy tattoo The problem with trendy tattoos is that they can easily date you For example, barb wire tattoos around the bicep, that screams 19980’s It’s far better to go with something timeless like an anchor, flower, or skull Now, if you really like a tattoo style that’s currently popular and trendy, there’s nothing wrong with getting it, but be intentional and don’t get something just because it’s in fashion right now

Tattoo mistake number four Going cheap You get what you pay for when it applies to many areas of men’s style and tattoos are no exception If you’re getting something permanent on your skin, you want to make sure it’s going to be of good quality Do your research, find a skilled tattoo artist that does consistently good work and don’t be afraid to spend a bit more to get a quality tattoo

Getting tattoos that you won’t be proud of later in life Gentlemen, try to stay away from any tattoos that are raunchy or you would be ashamed to show your family Anything sexual or involving profanity is a safe bet to stay away from It may seem cool now, but what about in twenty years? There you have it, gentlemen Avoid these seven mistakes and you will be well on your way to rocking some awesome tattoos

Now, it’s also important to understand that different cultures have different views on tattoos What may be cool and acceptable in one country may be shunned in another Remember, gentlemen, a tattoo isn’t something you want to get on impulse, you want to be proud of it in ten, twenty, and even thirty years Remember, the most important thing is to be deliberate and to think through the process For more information on tattoos on how to control your image on how to dress for success, gentlemen, go check us out at RealMenRealStyle

com [Music] Vishal: We’re really excited to see was that we ended up getting to interact with quite a few people who had a vested interest in who we are as people, who we are as professionals And not to be cheesy, but in reality we felt like we walked away with kind of a brotherhood with people who are interested in seeing how we succeed, see what we do in life and see what we do with our – our venture Chaz: I think at a time, you have an opportunity to be around other positive folks who are striving to better themselves in whatever way it is, that just encourages you to step out and make positive changes yourself [Music] [0:05:04] End of Audio