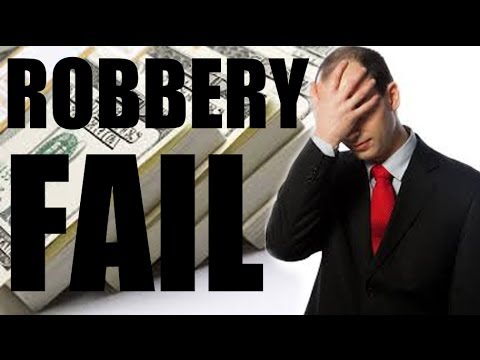 There are a few basic rules to robbing a bank First of all, cover your face

Second of all, wear hard-to-identify clothing and NOT an “I Heart Texas” T-shirt And third of all, try not to get robbed yourself after the deed is done One day, Larry Poulos of Arlington, Texas decided to rob a bank You know, because he felt like it He handed the teller a deposit slip with the word “bomb” written on the back, but she thought it was a joke

Well, there’s a sign things are going well Eventually, Larry convinced her he was serious So, the teller put money in the bag that he handed over, and Larry was instantly a whopping 5,000 dollars richer He must have been so ecstatic with his loot, he didn’t even notice the money that was flying out of the bag as he fled Well, neighbors noticed, and called the police

They weren’t the only people who noticed though Clearly, Larry also caught the attention of two rather large men Because when police arrived at Larry’s apartment, they found him with a bloodied head Apparently the two men had followed him home, beat the crap out of him, then had taken his loot as their own Instant karma’s a bitch, isn’t it?