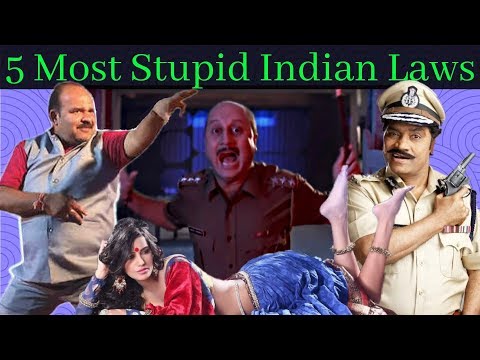 Have you ever thought to yourself – the next time my internet stops, I am calling the police? Well unlucky for us – we can't send the internet guy to jail for that just yet, but maybe someday Anyway, if you have thought of it, I like how your mind works and precisely for that reason I have brought for you today five – unbelievably crazy laws, which were at some point of time practiced by the judiciary in India

Did you know that if you were flying a kite in the British India it could have been treated as a hostile aircraft and you as a rogue agent flying it? Yes, I am talking that level of crazy Make sure to stick around in the end So without any further delay, let's start In the Indian subcontinent we have all played cricket in our childhood And at some point of time – We did have to fetch the ball from someone's garden

But did you know if the owner of the garden wanted to, could have sent you to jail for that? This was yet another gem from India's colonial past No wonder not many countries play cricket, the British really didn't want anyone else to learn it Kerala's illegal third child If you live in Kerala and dream of producing a football team of your own someday – including the substitutes? Then I'm afraid I have bad news for you Well bed for you, but good for the world that Kerala has a strict two-child policy

Unfortunately they don't have the authority to execute you but they can fine you ten thousand rupees Now hold on a second, ten thousand rupees is nothing to a rich or even a middle-class family, but quite a lot for the people living below the poverty line So basically if you're rich, you can have your football team cricket team anything you want But if you are poor, the state of Kerala doesn't want you to add more branches to your family tree Ironically Kerala is the only communist State Govt

in India Do live in Andhra Pradesh? And every time you laugh the flowers die? Then sadly my friend – you can never fulfill your dream of becoming a motor vehicle instructor; or at least you couldn't as per the Indian Motor Vehicles Act – 1914 was concerned It said that one had to have beautiful sparkling white teeth to become an instructor It's hard to imagine the relationship of good teeth and driving, Maybe the British knew something that others didn't But what you gonna do, they have your country! Imagine going to a nightclub with your boyfriend or girlfriend and there's only ten couples on the dance floor

So you think to yourself, this is your chance to shine And Bazzingaaa you get arrested for being the eleventh couple

If it sounded crazy – that's probably because it really was Thanks to the British once again Apparently in 1911 the British needed a law in India that would prevent more than ten couples to dance on the same floor Why? Maybe they were jealous I don't know Firstly Britain didn't have anything to do with this This has 'India' written all over it Adultery being an offense is punishable by law? That doesn't make any sense

I mean let the couples decide if they want therapy or the cleaning service from the John wick movie It's not a place for the government to poke their nose But guess what, our government do poke their nose up in there We do punish people for adultery and on top of that we punish only men for adultery Because it's considered that women – don't do such despicable things So if you are a married Indian man – and yet not man enough to end one relationship before starting another, remember this – when you get caught cheating on your wife – there's only one thing you can do to avoid going to jail Sex-change operation Indian laws figuratively and literally can't touch you anymore

And that was it So what do you think, which one of these would land you in the big house? Let me know in the comment section And as always, if you liked the video don't – forget to show the love by hitting the like button And if this channel is new to you, consider subscribing It could be fun

Anyway, I'll see in the next video and till then, have a good one