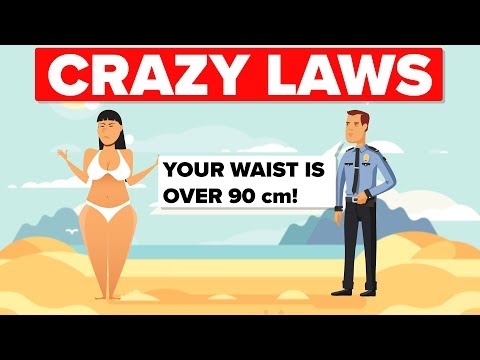 Thinking about taking a bath with a donkey? Fancy getting drunk in a British pub? Well think again as these potentially harmless activities and many more could well land you in trouble with the long arm of the law Laws of the land that may have made sense when first brought about, have a habit of sticking around, even if they have no real place in today’s society

Add to those antiquated laws a few newer bizarre rules of the land that have found their way into the law books, and we have a truly bizarre set of world legislation So what are some of the strangest laws that still remain on the books around the world? That’s what we’ll find out, in this episode of the Infographics Show, Strange Laws that Still Exist Great Britain has some of the strangest laws in the world, some of which are broken every day It is illegal, for example, to be drunk in a pub in the UK How many thousands of Brits break that law every single day? It is also illegal to carry a plank of wood along the pavement, especially, one would imagine, after getting drunk in the pub

Not quite so bizarre is the stipulation that members of parliament in jolly old England are not allowed to wear a suit of armour in Parliament But surely this law should have been updated by the lawmakers themselves while in Parliament, no? It is also highly illegal to handle a salmon in suspicious circumstances in England and Wales – and if there is an unsuspicious way to handle freshwater fish out of water, we’d love to see it It is also an offence to beat or shake a carpet or rug, except if it’s a doormat, before 8am, in the UK And if you’re an Englander, forget about dining on exotic waterfowl Unless you happen to be the queen of England, it is illegal to eat a swan

Should you be pregnant in Britain, it is perfectly legal to spend a penny in a policeman’s hat – or in fact, anywhere else, should it be an emergency And on a similar note, and on the subject of toilets, up in Scotland, if somebody knocks on your door asking to use the bog, you must, by law, let them inside and offer your bathroom Also in Scotland – that bizarrely colorful land of haggis and bagpipes, there may be more to that folk tale about Scotsmen and their kilts Ever wondered what exactly is beneath the famous tartan kilt? Well according to ancient legend – nothing! No underwear can be worn under the kilt, and according to an old law (or perhaps, to be fair, urban legend), if a Scotsman is found to be wearing underwear beneath his kilt, then he is routinely charged two beers by whoever discovered his non-commando status Although we can’t confirm the exact legal standing of this law, it is too difficult to resist sharing

The USA also has its fair share of quirky laws In Arizona, allowing your pet donkey to sleep in the bathtub is against the law Placing salt on a railway track is an offence punishable by the death penalty in Birmingham At first glance, this seems a tad harsh But the reason is that the train could either derail or attract cattle onto the track, which could also result in a major derailment or at least a delay

So don’t go putting salt on the rails, kids It’s also against the law to play a game of Frisbee without first acquiring the permission of a lifeguard in Los Angeles – although responsible frisbee throwing is, we are told, permitted Who can blame the city with all those lawsuits flying around? And what happened to the chicken who crossed the road in Georgia? Its owner got arrested It is against the law to let your chickens roam around unattended in this state In Hawaii, it is illegal to work at the same company as your twin brother or sister

We guess this law is in place to avoid workplace confusion as to who is doing what and who has taken the day off And dog lovers, beware Unless you have four legs and a tail that wags, it’s illegal to live in a dog kennel in Idaho, bringing a whole new meaning to sleeping in the doghouse Perhaps stranger than all these laws though, is the law in Vermont whereby women who want false teeth are required by law to first obtain permission from their husband Quite why this law still exists is totally baffling to us here at the Infographics Show

Perhaps someone can explain this one to us? And then there’s the strange legal world of mainland Europe In Greece, it is illegal to go sightseeing around the ancient ruins wearing high heels, and in France it is illegal to name your pet pig Napoleon In Rome, Italy, keeping a lone goldfish in a fish bowl is considered animal cruelty and is against the law But if you have more than one in the bowl, that is considered acceptable, because, as we all know, fish are sociable creatures Kids in parts of Poland are not allowed to travel outside the house with any Winnie the Pooh memorabilia, including T-shirts, backpacks, or lunch boxes

The cartoon character is considered a ‘non-gender specific inappropriate hermaphrodite’ without having the decency to wear a pair of pants, and the Poles for some reason find Winnie’s lack of genitalia offensive This one isn’t exactly an ancient law but was simply too brilliant to leave out of our study of quirky laws In the Cambodian capital of Phnom Penh, the sale and importation of water pistols is prohibited during new year festivities The reason being that a popular way to enjoy the New Year in this part of the world is to take part in a huge water fight, and that, governor Chea Sophara reckons, may lead to social unrest In Thailand, it is illegal to step on money, and it is also illegal to leave home without wearing underwear

It is also illegal to hold your hand out in tribute to The Hunger Games, or to publicly criticize a fellow countryman In parts of India, if a man is in debt, he can legally offer his wife as a down-payment until the debt is settled In Japan, it is illegal to be fat, with the government setting a maximum waistline of 335 inches (85 cm) for men and 355 inches (90 cm) for women

In China, Buddhist monks are banned from reincarnating unless they have specific government permission Yes, Asia is a wacky place In Samoa, it is illegal to forget your wife’s birthday In Australia it is against the law to disrupt a wedding – an act that is punishable by a fine of $10,000 All in all, across the world, while laws are there to help protect us and keep society functioning as a moral and ethical place, some of the decisions made by lawmakers will keep on baffling us as long as old laws remain and new bizarre rules come into being So, what’s the strangest law you’ve ever heard of? How does it stack up with our list of ridiculous laws? Let us know in the comments! Also, be sure to watch our other video called The Cost of the World Cup Thanks for watching, and, as always, don’t forget to like, share, and subscribe See you next time!