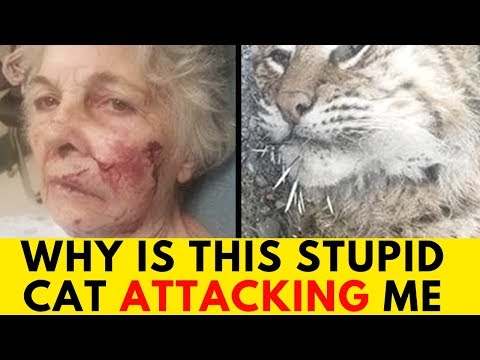 Most people who see a wild animal are generally amazed and surprised Children want to chase some rabbits, adults might want to snap a photo of a moose, but this elderly woman got a chance to meet a bobcat

In fact, she got more than just a ‘meetup’ This grandmother was viciously mauled by a wild bobcat one night and was luckily rescued by her dog, her sickle and then by her adult son This rabid bobcat attacked an 80-year-old woman and was later shot dead by her adult son Elsie Dabrowski has since slowly but surely recovered from her injuries Elsie Dabrowski is an 80-year-old grandmother who resides in Sunapee, New Hampshire

Over the weekend, she was doing some last-minute gardening and weeding before the sunset This is when a bobcat appeared out of nowhere and attacked her face, throat, and back In an interview, Elsie said: ‘all I could think of is ‘why is he doing this, why is this stupid cat attacking me?’’ During the random attack, Elsie was able to defend herself with a sickle and also with the help of her two dogs A sickle is a gardening/weeding tool with a curved blade used for harvesting, reaping or cutting Her adult son who heard all the commotion going on outside rushed to the aid of his mother

He came outside with a shotgun and killed the animal It was later revealed by the state’s Fish and Game Department that the bobcat did indeed have rabies and that could explain why the bobcat attacked the woman Elsie received 50 stitches and several rabies shots while at the hospital She said: ‘it could have got my eye Could have got my jugular the way he was biting

Could have got anything, you know? God is good’