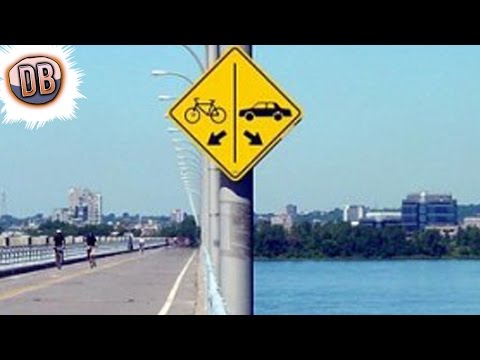 • There’s nothing worse than getting inside a lift and having the stench of whizz immediately insult your nostrils Singapore decided enough is enough, and implemented urine-detection devices in some of their more frequently used elevators These devices can detect the stench of urine and trigger the elevator doors to slam shut, holding the pee-pertrator hostage until police arrive • Anyone found letting loose in a Singaporean elevator could be charged up to 500 bucks 8 – One Dollar Law • If you’re waiting for payday you might want to be careful walking around the streets of Chicago

• The state-wide vagrancy law states that if you have less than one dollar on you at any time then police have the right to arrest you for being a bum You could be wearing a gold-plated watch or carrying a sack of rare jewels, but if you can’t show them one single American dollar then you can expect to receive the full force of the law 7 – Booze Hounds • Chicago has a few strange laws • Residents of this city are prohibited by law from providing whiskey to dogs It is strictly forbidden to pour a shot of hard liquor for your canine pal, no matter how much he might beg for it

Perhaps there was an epidemic of pooches getting wasted, or maybe some deadbeat owner drove his dog to alcoholism – for whatever reason they felt it necessary, it is explicitly illegal to give your dog booze in this city • So next time your schnauzer wants to party, ask him politely to be the designated driver instead 6 – Moustache Love Crimes • Meanwhile in Iowa City, there is a very peculiar law that potentially stops men and women from embracing in public • The law states that ‘If a man is sporting a moustache, he is forbidden from kissing a woman in public’ So if you insist on indulging in public displays of affection in this city, you have to go home and shave first

It’s not quite clear who exactly is being offended by hairy-lipped men and their lady lovers, but apparently the state decided that they couldn’t take it anymore and outlawed it altogether • Curls may get the girls, but a moustache will potentially get you a criminal conviction 5 – Hawaiian Shenanigan Law • If you’re ever lucky enough to take a trip to beautiful Hawaii, just remember that in some areas you will be fined if you don’t zip it after dark • Honolulu is totally up for you to party on down at a luau, and fill your days there with all the amazing sights and activities you can possibly imagine However the law clearly states that it is ‘illegal to sing loudly after sunset’

• Unfortunately you’ll just have to wait for sunrise to belt out your favourite island tunes 4 – Dirty Talking • In Willowdale, Oregon, there is a sexist law that prevents men and women from talking dirty while they are engaging in sexy times • The ancient law states that while having sex, men are not permitted to talk dirty to their wives The wives on the other hand are legally allowed to say whatever they like or even swear like sailors if that is their preference • The law doesn’t state what exactly constitutes dirty talk though, so maybe they were simply referring to conversations about unwashed dishes or that pile of clothes in the laundry

3 – Frowning in Milan • There is no excusable reason not to smile in the land of spaghetti and Peroni • Citizens of the beautiful city of Milan in Italy can be legally fined for not smiling Looking miserable is unacceptable here, so if you plan on visiting you might want to shine your whites every chance you get The only exception to this ludicrous law is when you’re at a funeral or visiting a hospital, so as not to appear completely insane • Luckily Milan is a beautiful and fascinating city, so you wouldn’t be hard pressed to find a reason to smile

2 – Kid Brides • In Saudi Arabia, there is no minimum age for a person to get married; and they don’t worry about that pesky thing called ‘consent’ either • In 2008, an eight-year-old girl was refused a divorce from her 58-year-old husband, because the husband didn’t want to separate and also because he did not intend on ‘consummating’ the marriage until the child was a teenager How thoughtful of him The girl’s father allegedly owed the husband in question a sum of money which he offered his prepubescent daughter’s hand in marriage as payment • Thanks to her persistent mother, the 8 year old was eventually granted a divorce and went on to enjoy the rest of her merry childhood

1 – Talk about ‘Gay’ • In Russia, it is illegal for you to tell children that gay people exist • A law that was signed off by President Vladimir Putin prohibits the promotion of “homosexual propaganda” to people under the age of 16, forbidding anyone from telling teenagers that homosexuality is even a thing If you tell a young person in Russia that being gay is A-Okay, or that homosexuals and heterosexuals deserve equal rights, then there’s a good chance you’ll end up being fined, put in jail or even deported • Even sporting a rainbow flag could be considered an act of attempting to corrupt a poor child’s mind with barbaric ideas of equality