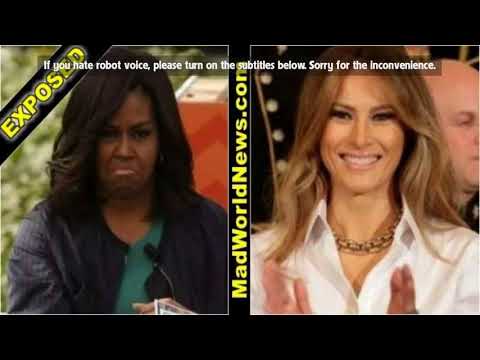 ” Thankfully, First Lady Melania Trump acted just in time to give her a nasty surprise Michelle Obama has been raking in the cash as she goes around the country speaking at liberal events Yesterday, she was in Los Angeles at the Women’s Summit, some leftist convention where host Tracee Ellis Ross sat down with the former first lady to have a “conversation” One question Ross asked Michelle was how do we make sure that young girls grow up to think “beyond gender” and “to dream beyond limitations” with how our society is today? Michelle mused for a minute and decided this would be the Trump bashing portion of the presentation Michelle Obama said, “Sorry, in light of this last election, I’m concerned about us as women and how we think

And what is really going on What is going on in our heads where we let that happen, you know?” She continued, “When the most qualified person running was a woman, and look what we did instead, I mean that says something about where we are Forget everybody else That’s what we have to explore, because if we as women are still suspicious of one another, if we still have this crazy, crazy bar for each other that we don’t have for men” Michelle finished with, “If we are still doing that today

If we’re not comfortable with the notion that a woman could be our president compared to … what, then we have to have those conversations with ourselves as women” Hilarious, isn’t she? According to Michelle, “how did we [women] let that happen” translates into any women who voted for Trump was stupid Well, Michelle wasn’t in charge of the women who voted for Trump, thank God, and she didn’t “let anything happen” She’s not that powerful Actor James Woods thought so too, tweeting to Ms

Obama, “You didn’t ‘let’ anything happen The citizens of the United States, through the power of the Constitution, duly elected a President of their choice May come as a shock to you, madam, but the People speak in America We don’t do what you ‘let’ us do” You didn’t “let” anything happen

The citizens of the United States, through the power of the Constitution, duly elected a President of their choice May come as a shock to you, madam, but the People speak in America We don’t do what you “let” us do — James Woods (@RealJamesWoods) May 6, 2018 Female Trump supporters agreed, with Twitter user Carole posting, “Dear @MichelleObama Here’s OUR FOREVER FIRST LADY” Dear @MichelleObama Here’s OUR FOREVER FIRST LADY @realDonaldTrump @EricTrump @DonaldJTrumpJr @ericbolling @KamVTV @Lrihendry @grammy620 @johncardillo @CarmineZozzora

— Carol (@Carolde) May 6, 2018 In fact, Michelle Obama’s comment, bashing women who voted for Trump as stupid, might be her reality, but it’s not accurate at all It’s not what really happened Smart women weren’t duped to vote for a gender We did our homework and learned Hillary Clinton wasn’t on our side as women, she was an opportunist who used her political position to commit crimes The former first lady’s timing was perfect in bashing women who voted for Trump

Our first lady will be front and center in the Rose Garden on Monday as she expands her role This flies in the face of Michelle Obama’s recent comments and makes her look like a fool CNN reports, “Melania Trump will announce her eagerly awaited formal platform Monday during a Rose Garden event, nearly 16 months into her tenure as first lady While Trump has since September of last year said she plans to focus her efforts on the well-being of children, she had yet to define what exactly that means, instead delving into a broad range of topics under a wide umbrella of issues” They add, “That changes with a planned Rose Garden announcement, her first speech from that historic location on the West Wing side of the White House, feet from the Oval Office

” Former First Lady Michelle Obama did not announce her “Let’s Move” campaign until February 2010, 11 months into her tenure in the position, according to CNN So for all the naysayers who constantly complain Melania isn’t “doing anything,” maybe it’s time they laid off the first lady In fact, Melania had been more of a traditional first lady, which makes the leftist go nuts They were silent after she pulled off the first White House State Dinner without an event planner, doing something no recent first lady has ever done It all comes down to your values

This host at the Women’s Summit said to Michelle, “A girl who just dreams about her wedding is a sad thing we need to change” Ms Obama agreed To those at that Women’s Summit, a young girl wanting a family and being a stay at home mom is obscene That is why we love Melania Trump

She has been a successful businesswoman in her own right, but she chose to be “just a mom,” after she had her son Barron Raising a family is probably the most important job in the world, and traditional values should never go out of style