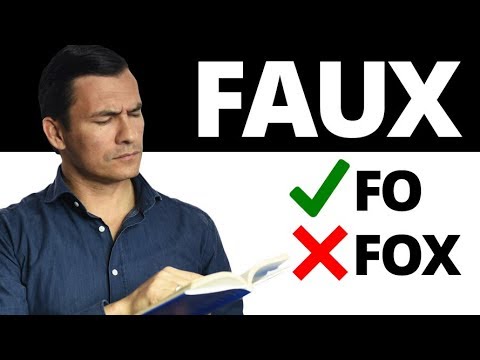 10 Words Stylish Men Mispronounce Don't Look Stupid Saying These Style Words Incorrectly [0:00:00] F-A-U-X, fō not fox And, apparently there are some style guru out there who’s mispronouncing words like this

Don’t worry, guys, Antonio is on the scene and I’m here with today’s video, ten words that stylish men mispronounced that makes them look kind of stupid [Music] Now, if you missed the joke at the beginning, let me clarify I’m the guy that’s mispronouncing a lot of these words And, I have to admit, stop, I only speak American English and Texan A lot of these things coming from French language, they’re coming from the Italian language, they are coming from the Spanish language

And over there they’ve got letters that are silent, they’ve got rolling Rs, they’ve got all these things which we don’t have in my language So, I’m looking at this stuff and, yes, I’m going to make mistakes and when you make a mistake, what I want to stress is that it doesn’t make you stupid, it doesn’t make you an idiot if you mispronounced things It just simply means that you are mispronouncing it So, why go through the effort to pronounce things correctly? Well, I think it shows that you actually do put in the effort and it helps to clearly communicate with others what you’re talking about Am I going to pronounce all of these perfectly? Probably not, but I’m going to give it one heck of a try

First on my list Lacoste, not la-cowst, not lacos-te, it’s lah-KAHST So, this is named after René Lacoste It was a clothing line he started in 1933 He was known as the crocodile, a phenomenal tennis player coming out of France This guy realized at the end of his career, hey, I should capitalize on what I’m seeing in a shift here

Basically, you have the gentleman starting to actually play more sports, sport clothing was coming out, so he pushed into this, he grew the company Lacoste Today, well-known for their polo shirts, a number of other pieces of clothing, they make actually a very good quality, but this is a company still based out of France and one that you want to pronounce correctly, Lacoste (lah-KAHST) Next stop, we’ve got attaché (aˈtaSHā) not attach So, an attaché is a person attached to a diplomatic mission usually in embassy and the attaché case was a specially developed case that was made to hold nothing but important documents Nowadays, you see them they become a little bit more popular

I think they work great for a smaller man, they’ve just got smaller proportions, they are great for holding a small thin laptop or something like that So, that’s where you’re going to see them up Make sure to pronounce it correctly, attaché (aˈtaSHā) Next stop, gentlemen, we’ve got Porsche (POR-shuh), not porsh And this one is hard

Again, va-let, not vaˈlā Makes sense? This is the person that’s going to go park the vehicle and, yeah, then you go into your gala So, before you drive your Porsche to the gala, you’ve got make some moolah So, how to make that happen, guys? You got to get a great job or you’re going to marry into some money But, let’s say you’re going to go after that great job, well, make sure that you’ve got a great résumé (‘rezəˌmā), not a rəˈzo͞om not a resumā, it’s a résumé (‘rezəˌmā)

And I know that most of us probably have this, but I’ve heard it mispronounced And this, again, is one of those words that’s got the accents on it and you may think that, okay, it reads like resume, but anyone that’s been going for those higher end jobs understand it’s a résumé If you call it a resume, you’re probably not going to get the job So, for this next word, I want to hear from you guys down in the comments do you agree with me or do you disagree with me, okay? N-I-C-H-E It is pronounced niCH and it’s pronounced nēSH

Neither one is right, neither one is wrong depends on where you’re at So, in North America, we’re talking Canada, the United States, niCH is going to be the common pronunciation However, over in England maybe over at Australia, they’re going to say nēSH more often Why? Because it goes back to the original French What’s right? What’s wrong? Guys, I’m going to say you can go with either, it depends on where you’re at and what people commonly say

Next stop we’ve got Dormeuil (do-mā) not dor-myo͞ol So, the R and the L are silent in this This is an old French fabric manufacturer that make really high end suits And I remember being a custom clothier being very impressed with the fabrics speaking with the distributor, these are fabrics that are controlled If you go into a tailor shop and they have Dormeuil fabric, this is really a good thing because they’ve got certain qualifications

Let’s just say this stuff is great, but don’t call it dor-myo͞ol [0:05:16] Next stop we’ve got Zegna (ʣeɲɲa) not zeg-na So, notice the G is not pronounced This is an Italian brand, really high-end Started off making only fabrics, then they got into custom menswear, they also got into ready-to-make wear, but this is stuff that’s priced

If you go to Vegas you go to their store, to the Zegna store you will be touching jackets that cost thousands of dollars just right off the rack, we’re not even talking custom So, great stuff, but make sure you call it by the right name, ʣeɲɲa not zeg-na And finally, we’ve got one of the most famous high-end brands out there, Louis Vuitton (loo-ee vee-tawn) not loo-EESS vee-tawn So, you’re not going to be very hard on those letters Again, loo-ee vetawn

Pretty simple especially if you go a little bit quicker All right, gentlemen, now it’s your turn Let me know down in the comments what did I still mess up on? I know I’m not fluent in French or Italian, so I probably messed up a few of these words I felt I was doing pretty good and I think at the end of the day, what I want to stress is you’re not stupid if you mispronounced things especially if you put in the effort, you try your best The goal with pronouncing things correctly so that you can better communicate with others

What words do you commonly mispronounced? Let me know down there in the comments Like, share, pass this video around Oh, and by the way, I am going to be in Paris here in November I don’t know how many of you guys are actually over in France and would want to possibly meet up I’m only going to be there for about four days

I’m also going to be over in London for a few weeks, me and Paul McGregor I think it is on November 10th We’re looking to have a quick meet up, nothing really big just have a, you know, bunch of guys come out to a pub if you want to But, I do want to have a quick meet up though in late November in France, but let me know down in the comments if you’re in Paris, I’d love to set up a time to meet some of you guys Take care