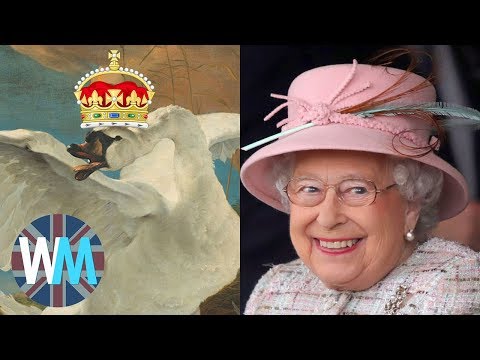 England is a country founded on one of the strongest legal systems in the world, but that doesn’t explain why some UK laws are just downright bizarre Welcome to WatchMojo UK and today we’ll be counting down our picks for the top 10 strangest UK laws which are still in place today

For this list, we’ll be counting down 10 historic laws from Britain’s past that are technically still around, even though they really make no sense There are some things you shouldn’t do while under the influence of alcohol For example, the licensing act of 1872 states that it’s illegal to be found drunk whilst handling a cow, horse, sheep, firearm and steam engine Now, while they do sound like things to be kept out of drunken hands, you must wonder just how applicable this law is, and whether it came to be during a time when drunken horse riders and train conductors were at a critical level It’s only right that the brave men and women who go to war for their countries are venerated as such, which is why in 1682 King Charles II founded the Royal Chelsea hospital in London

The 66-acre site was meant to serve as a nursing and retirement home for English soldiers with at least 12 years of service However, people began to abuse this privilege by pretending to be veterans, in some cases stealing the distinctive red uniforms the veterans wore This lead to the passing of the Chelsea pensioner law in in 1695, which still exists today, 422 years later Trespassing is one of the oldest laws in existence, and the rules are clear; if it’s not your property, stay off The one place where this doesn’t apply though is the coastal county of Cornwall in the South of England

A law was put into place in 1603 which allowed men known as “baulkers” to legally enter other people’s property in order to shout fishing boats, directing them to schools of fish Oddly, this act still exists today, even though modern fishing methods have rendered “baulking” obsolete Few things are more annoying than having to pay rent to a pushy landlord, however, we may not realise just how good we’ve got it An ancient law originating in 1297 states that should a landlord feel that a tenant is behind on the rent, then it is fine for them to take any of the tenant’s possessions to settle the debt Obviously, this would cause far more harm than good and newer ownership laws have superseded it, but the act does still exist in the magna carta and has never been officially repealed

Messy neighbours can often be a hassle to live with, but this act from 1897 shows just how bad things were for the house proud in 18th century England The town police clauses act makes it clear that anybody who owns a pigsty is committing an offence by keeping their swine in the front yard This act is still in play, however, for anyone who is interested in creating a pigsty on their doorstep, there are a few workarounds, so long as the sty is properly enclosed and hidden from view by a wall, then it is permissible Despite being next door to each other, there is a truly odd law regarding Welshman within the city of Chester The law prohibits that no person from Wales is permitted to enter Chester before sunrise, and any Welsh person within the city walls must leave before sunset, under penalty of death

The law originates from 1403, and it was imposed by Henry V following the Glyndwr rebellion in 1400, which saw Wales try to gain independence from England Obviously, this law is never enforced, but like many other entries in this list, it is a law that has never been overturned As decreed in a 14th century act called the “Prerogative Regis”, all whales and sturgeon fish washed ashore must be offered to the reigning monarch, who will decide what to do with them This bizarre law is still upheld to this day, and when, in 2004, a fisherman named Robert Davies caught a 10-foot sturgeon in Swansea Bay, Wales, he and promptly contacted Buckingham palace to offer it to the queen She politely refused the fish, and Davies went on to sell it at a local market for £650

Few animals are as regal as the swan, and the British royal family has long taken note of this As far back as the 12th century a law has been in place which protects all wild swans as property of the monarchy However, while this may sound like a swan friendly law, the truth is it was put into place in order to stop commoners from catching and eating the birds, since they were the royal’s favourite meal Today swans are no longer on the menu, but they are still protected, with surveys taking place each year in the Thames to monitor their numbers and health One of the most sacred of British institutions is kicking back with a few pints in the local pub, which is what makes this next law so outrageous

Under section 12 of the licensing act 1872, any person who is found to be drunk in a licensed premises, such as a bar or pub, is technically in violation of the law Furthermore, the same act states that it is illegal for a bartender to knowingly serve more alcohol to someone who is already intoxicated Yeah right Before we unveil our number one pick, here are a few honourable mentions: The image of the Arthurian knight charging into battle is one of the most legendary in all British history, but chainmail and broadswords weren’t just reserved for the battlefield, they also saw some use in the political arena too However, the 1313 Statute Forbidding Bearing of Armour was put into place by king Edward II, as following years of political turmoil, several of his cabinet had opted to settling their differences through brute force rather than intellectual debate