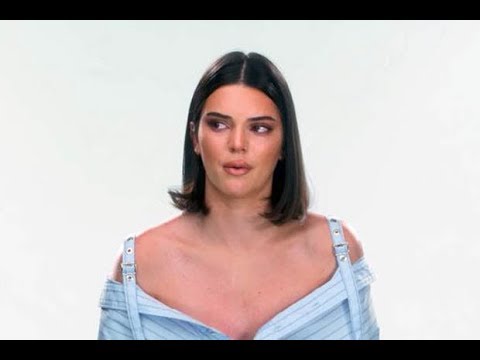 Kendall Jenner in tears over 'f***ing stupid' Pepsi advert controversy Back in May, the supermodel appeared in a controversial advert for fizzy drink giant Pepsi, which saw her calm a protest by handing a police officer a can of the soft drink People were angered by the suggestion that world peace could be achieved with just a can of Pepsi, especially given the protests in the US at the time, and even more so by Kendall

Even Piers Morgan called the ad stupefyingly diabolical SOBBING: Kendall got emotional as she spoke about her Pepsi advert CAREER SUICIDE: Kendall cured the world with a single can of a fizzy drink Kendall Jenner Pepsi eventually decided to pull the ad, admitting that it missed the mark, and apologised to Kendall

Now, the 21-year-old has addressed the controversy, after initially deciding to fade into obscurity Kendall was visibly emotional as she opened up to her older sister Kim Kardashian on camera CONTROVERSY: The Pepsi ad was pulled after backlash on social media I would never purposely hurt someone ever, she said though tears And I would, obviously, if I knew that this was gonna be the outcome, like I would never have done something like this, but you dont know when youre in the moment and like, it was

so, like I just felt so f***ing stupid She added: The fact that I would offend other people or hurt other people was definitely not the intent, and thats what got me the most is that, I would have ever made anyone else upset ADVICE: Kim gave Kendall some words of encouragement In August, Kim spoke out about Kendalls feelings on the moment she committed career suicide in The Hollywood Reporter

Were not perfect, but you see these things in the media, like Kendall and her Pepsi ad, where I see her at home crying, she said But in the media she looks another way because shes not addressing it