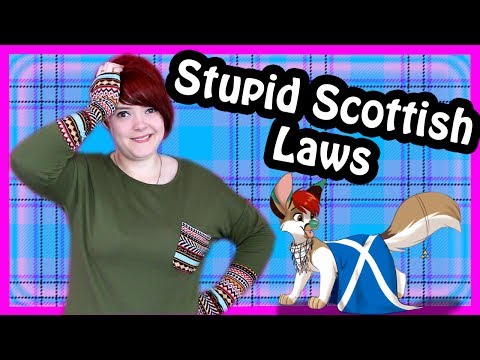 Hi lads and lasses, it's Mosco and I'll meet you for a new video And today we're going to talk about really stupid laws in Scotland, because, believe me, there are not bad

But before getting to the heart of the matter, I would like to thank all the people who subscribed, loved, shared, saw, the content that I publish because my channel has grown a lot lately, and I wanted to take the time to say thank you once again, I know I repeated it a lot If you missed the live I did for my 25,000 subscribers, the replay is dispnible There you go, one last thanks for that Without further ado, let's talk about really stupid laws in Scotland Did you know that in Scotland, it is illegal to be drunk with a cow? Not a child, a cow, not a car, even if I think it is too, but a cow

Now, how did this rule come about, or how did that law come about, I'm not sure I want to know What can you do stuffed with a cow? Oh no The same law does not exist for sheep Although they are at a more accessible height so we will not They try to milk? They tried to mount it,

no, not in that sense, stop with your mind gone bad, seriously I do not understand why this law came into being, and why it applies to cows, but make sure that if you are in Scotland, that you are not drunk, taking out a cow I know, but I'm not talking about the girlfriend you came with

Okay Oooh that was under the belt It was really mean In Scotland, it is also illegal to hang yourself And if you have the misfortune to try, and you miss, you will be hanged for trying

But if you did not succeed the first time, but do not worry because the government will make sure to do it right for you I find this one really hysterical She said, you tried, you missed, not bad, we'll do it for you It is also illegal for a boy under 10, to see a bare mannequin What? Okay, because you know how accurate the models are in their imitation of the female anatomy

That does not make any sense And what does it have to do with cows, can not we trust young boys with a naked female model? I do not want to know If you're a Scot wearing a kilt, and you're wearing something under it You will have a fine of two cans of beer Really, look, that's really the case

First, how do they verify it? How do they know? Is it at a time or like Marilyn Monroe, the wind blows up, and the guys have to keep their kilt down, while we see their underwear So the people made "HAAA he's wearing something under his kilt, Let him pay two bottles of beer! " Or does the police ask you to lift your kilt? I know it was a very funny scene in "The Angels' share" By the way, it's an excellent Scottish film, I highly recommend it This last one is probably my favorite In fact, it's safe, my favorite

Because we must question the origin of this law It is illegal, in Scotland, to sexually harass, a drink cart Let me tell you that if this law did not exist, Harry Potter would be really much more funny You imagine, in the train, to Hogwarts, One of the candies on the kids cart? I can already see him It would make Harry Potter much more interesting

Surely, it would make it fit in the comedy category anyway, but would also make it extremely inappropriate How did this law come about? How? We can only ask the question What could have caused someone to sexually harass a drink cart to the point that They said to themselves, "No guys, it's over, we will create a law against that, you are no longer allowed to sexually harass a drink cart Maybe it's better to let his imagination speak on that one Maybe the reality, for this stupid law, is not as funny as one might think

So we will not look any further Many of you have tried to join me, and the best way to do it is via Twitter I answer almost every tweets to @MoscoMoon, see for yourself Or join our Facebook group called "Wee Scottish Group" It's just full of people talking about Scotland and sharing

If you're new to my channel, subscribe because I publish a new video every week Like this video too, if you like it, it really helps me a lot Do not forget to share, if you think that an acquaintance can say to himself: "It's really interesting, I'd like to know more about these stupid Scottish laws, because they are really stupid " Also, I have a Patreon based, and if you want to give even one euro per month It will help me a lot, and it will finance travel that I will do in 2018, I'm going to Japan, New Zealand, Australia, and a lot of place in the United States that I really very very much want to visit

But that will be in 2018 and will last about 6 months So if you want to help me and make a donation, go visit my page Patreon, I offer rewards depending on the level of your donation And I'll see you next week for a new video, and until then, "Haste ye back, guys!"