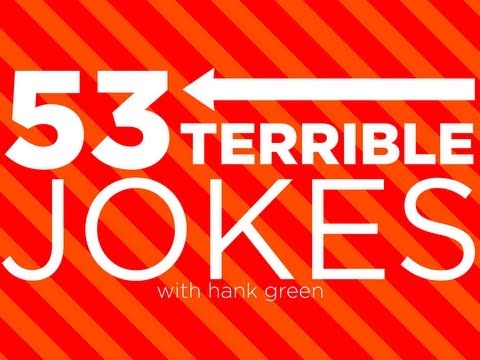 Good morning, John – today, I'm gonna tell you a bunch of jokes that are gonna make you go "har har har" [sarcastically] but you – really – you're gonna enjoy You're gonna pretend that you don't enjoy, but you're gonna like 'em

I'm planning on beating my previous record; that will require fifty-two jokes in less than four minutes Let's go What do you call a five-foot psychic that's escaped from jail? A small medium at large Why did the mermaid wear seashells? 'Cause she grew out of her 'B' shells What concert costs forty-five cents? 50 Cent

featuring Nickelback How did the hipster burn his tongue? He drank coffee before it was cool What is invisible, but smells like carrots? Rabbit farts

What do you call a fake noodle? An impasta! What do you get when you cross the Atlantic with the Titanic? About halfway How does Jack Frost get to work? Bi-icycle Bi-icycle B'icicle [laughs] Why did the Face of Boe go to the party by himself? 'Cause he had no body to go with

What do you call a fish with no eyes? A fsh [still pronounced "fish"] When I found out my toaster was not waterproof, I was shocked! How often do I make chemistry jokes? Periodically I actually told one just the other day! There was no reaction My boss, he told me to attach two pieces of wood togetherI totally nailed it If the mushroom was such a fun guy [fungi], why didn't they have the party at his house? 'Cause there wasn't mush room! [laughs creepily] Why did Cleopatra fall off the swing? Because she's dead What's orange, and sounds like parrots? Carrots The spider just crawled onto my keyboard Ookay, I think it's under control

(Heh, 'cause control is a key) What does Gary Newman want to be when he grows up? Gary Oldman [laughs] Everyone wants to be Gary Oldman, though

What's Michelle Obama's favorite vegetable? Yeah, it's Barackoli [broccoli] Barackoli, right? What are the strongest days of the week? Saturday and Sunday 'Cause all the rest, they're weekdays [weak days] What do you call a pretty woman on the arm of a banjo player? A tattoo (I don't know why banjo players

I dunno!) My friends and I, we put on a performance about punsIt was basically just a play on words

Why do the French only use one egg per omelet? Because, in France, one egg is un oeuf [enough] [laughs] What did the shy pebble wish? Just that she was a little boulder [bolder] A little boulder! Why is that so cute? Did you hear that David lost his ID in Prague? Now we just have to call him Dav Why was six afraid of seven? Because seven has cold, dead eyes What do you call a pencil without lead? Pointless

Beethoven's favorite fruit? Ba-na-na-na [singing, to Beethoven's Fifth Symphony] How do you make an octopus giggle ten giggles? You give him ten tickles [tentacles] (Ten tickles!) [laughing] Knock, knock! Who's there? Interrupting owl Interrupting owl- WHO! Why do gorillas have big nostrils? They have big fingers Which side of the chicken has more feathers? The outside

A horse walks into a bar, and the bartender says: "Why the long face?" And the horse says: "I'm finally realizing that my alcoholism is driving my family apart" What do you call a man who shaves twenty times a day? A barber What did one eye say to the other eye? "Between you and me, man, something smells" Never trust an atom; they make up everything! I took the shell off my racing snail, 'cause I thought maybe I'd make it a little faster, but if anything, it's more sluggish Why did the Dalek cross the road? To enslave humanity

What do you call Santa's little helpers? Subordinate Clauses What did the hat say to the hat rack? "You stay here, I'll go on ahead" Why were the broom late for work? 'Cus it overswept Did you hear? Oxygen and magnesium are totally going out It's, like, OMg

Did you hear that the two antennas got married? I heard the ceremony was kind of terrible, but the reception was awesome What's ET short for? So he can fit on his space ship Did you hear about the new corduroy pillows? They're making head lines My granddad had the heart of a lionand a lifetime ban from the Bronx Zoo Sherlock, what do they call primary school in America? Elementary, my dear Watson Why can't you hear a pterodactyl goin' to the bathroom? 'Cause the "P" [pee] is silent

" [whale noises] And the other one is like, "Man, Steve, go home You are drunk!" I wasn't sure it was possible, but here we are, fifty-three jokes and four minutes later Thank you, everybody on Twitter, for suggesting jokes for me If you want more like this, I've done a few of these over the years And John, I'll see you on Tuesday