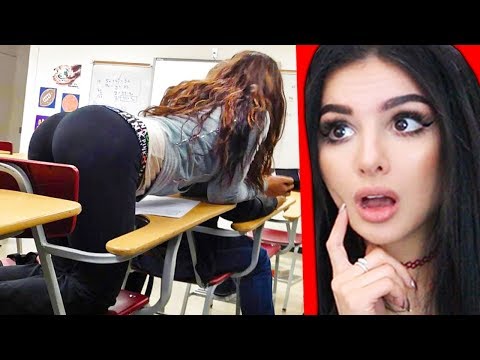 This sixth-grader told to change his haircut by his school And tonight, his father wants to know why You're telling me this little boy got suspended from school because of his haircut? Man, I would have thought he had some Rapunzel ass rainbow hair with bugs living in it, leftovers from three days ago Something crazy you know? No The boy's school gave him a choice, fix his hair or face discipline

Well the student says he's actually had this haircut for several months but no one said anything about it being a dress code violation until late last week So this kid has had his hair like this And then one day he walk in to class and the teacher's like, Billy, what the hell? What is the little thing on your head? It's a haircut It's a what? Boy, you better take your ass to the office I ain't having this

Suspended I wanna see what this bitch look like So I could be like, excuse me Ma'am, you can't wear that stupid-ass logic to class Like a boy can't have two lines in his head? I mean it ain't even a private school or anything It's a regular school

Two lines is gonna stop you from teaching this kid Y'all gonna suspend him? School said fix it by Monday or be punished with in-school suspension I don't think it's fair He's gotten his hair cut like this for six months Now all of a sudden it's a problem

Where he had a space here and a space there They're like, fix it But what y'all want him to do, shave his head? Y'all want him to like glue his hair back? Y'all want him to wear a weave? What do you want this boy to do? How you gonna fix it? Y'all gonna have to wait until it grows back He took a Sharpie permanent marker and colored the bottom of this area So in order for him to get an education, we have to treat his hair like a coloring book, I guess Wow, so to fix it, they took a Sharpie

Why are you gonna take a Sharpie of all the things you could cover it with? They got sprays for like gray hair that you could like spray on him I'm pretty sure they could like spray it on his head Jeez This is traumatizing Imagine getting suspended for your haircut

Bye bitch Y'all don't want me here Imma leave Letters, symbols and designs beyond a single straight line which draw attention to an individual shall not be permitted Okay, hold up

Next up, this kid got suspended for wearing a hoodie Okay, I'm good I ain't got a hood I ain't in school either This doesn't apply to me

Let's just suspend everybody The Penn Hills School District suspended dozens of students for various dress code violations Now I had the chance to speak to one of those students today He wasn't in school because he says he took the risk of wearing a hoodie despite the district's new dress code policy New dress code policy, no hoodies

So if I wore a sweater without a hood it's okay? I need to know My first suspension is because of a hoodie This is the hoodie that got 18 year old Chris Dixon suspended from school on Friday Oh, excuse me young man, what does this hoodie say? It's all starting to make sense now [Music] Disgusting

What? That's like y'all buying my merch and then I ban you from watching my videos What the fu– The policy states that students may wear garments with hoods to school but must remove them and place them in lockers or bags once school begins So if it's cold in the class, you can't wear a hoodie? You can't wear a jacket? Like bitch, I'm cold Classrooms are like 60 degrees, what do you want me to do? Why with only a hood? What if I tuck the damn hood in my shirt? People out here getting suspended over this There are people dying out there

And there are people getting suspended over wearing a hoodie A garment with a hood presents a unique concern Both in regard to safety and disruption of the educational process Oh my god Jake over there, he's wearing a hoodie

I cannot concentrate on my work Oh my god, that hood I just can't stop thinking about it It's just so disruptive I'm done

I'm like so done with this They've come up with saying that it's potentially like gang related or they conceal weapons in it Y'all hear that? Y'all wear a hoodie to school, you're most likely in a gang Or you have weapons hidden in there On Friday the district confirmed that it suspended 46 students in high school for various dress code violations between Monday and Thursday of last week

40 something students suspended I feel like the teacher is like, I don't want to deal with these kids I ain't trying to do all this extra work Less students means less work for me Just suspend them

I can't believe this is real This is actually real This is no troll First we got hoodies And now we got, Dozens of girls are forced to serve in-school suspension for wearing yoga pants

Man, I am so done with school because that is all I used to wear Hoodies and yoga pants What the hell are you supposed to wear to school? Y'all want me to come in my underwear? Is that okay? Or am I still gonna get dress coded? Yeah, Imma get dressed coded Literally, the two most comfortable pieces of clothing, hoodies and yoga pants Students here at Loveland High School tell me they were told late yesterday afternoon that they were no longer allowed to wear yoga pants to class

Yoga pants Dozens of teens, including many honors students reprimanded over what they chose to wear to class Y'all gonna ban yoga pants, we all gonna show up in yoga pants Yoga pants We're just trying to like make a point that we all just want to go to school

Loveland School administrators apparently think so Olivia Leg was one of 17 who spent the day in in-school for suspension for wearing them Dozens of others say they were sent home or forced to change So, is it because it's distracting or is it because they're see-through? Like, I know in my school, you weren't allowed to wear tights or like see through yoga pants, but like most yoga pants are not see-through Some yoga pants are like, especially the cheap ones, Ya girls booty like stretches it, and if you were like bend over in them, it is kind of see-through

I feel like sweat pants make your booty pop more How come sweatpants are allowed but yoga pants aren't? And these students say they don't wear these pants for attention, but because they're comfortable Being banned from yoga pants and telling us that they're revealing and unacceptable, it's just not right Like they go down to your legs They cover everything

Girls, they just want to be comfy This kid was suspended for posting on social media I feel like this should be a thing Young people who talk shit online, they should be able to track your IP to your school and report your ass How embarrassing would that be? I just want to see all the trolls get in trouble

So many little boys his age, they try to be all edgy And this one, he got in trouble Replied to another Monroe Junior High students Instagram post got him suspended Friday for 10 days His parents were shocked Ten days suspension for telling somebody, do it

Drink the bleach What about the kid who posted the bleach saying, should I drink bleach? What the f — They should gets to suspended too I'm thinking something serious, something major He's pulled a gun He has, he has done bad things

Pulled a gun His dad talking about, Oh, my son got a 10 day suspension Oh, I was thinking he pulled a gun No, motherf–, it would be all over the news Your son would be in jail

He's thinking it so casually too Like, oh, my son pulled a gun or something In the thread after Johnson posted do it, the student who made the original post said, You want me to KMS? Meaning kill myself And thanks, as those letters didn't click at first, so he replied, You're welcome Damn, I feel like a lot of my haters

Just really dumb little boys that don't know what to say And this one just so happened to get in trouble I would never want someone to kill themselves Never Y'all throwing around kill yourself, drink bleach

Are gonna sit here like, I would never want someone to kill themselves Never Then don't say it Where do they get the power to reach into your life after school hours, off school property? Not even talking about school issues For something, a question that was asked and answered with two words

Okay, let me tell you a little story because this actually happened to me When I was in middle school, I did the most petty thing I liked this boy and then he started dating this girl And she knew that I liked him And I'm like, girl, what you doing? You know I liked him

And then she just like ignored me and started avoiding me at school And then I messaged her on Facebook, I'm like, you such an ugly bitch F — you I don't know exactly what I said but I said something mean And you know what she did, she printed it out, took it to the Principal, and got my ass in trouble

I didn't get suspended or anything but basically the principal thought it was really stupid, and just had us like sit and talk and like pretend to be friends Stop being like mean to each other They're like, I won't get you in trouble if you just like shake hands and be friends right now And we were just like, Yeah, friends But anyways, that's all for today

I hope you guys enjoyed this video Comment below Which one you think is the stupidest, and does your school have any really dumb rules? And have you ever been suspended? Comment below I want to know And make sure you hit that like button in the face if you want a part 2

And subscribe, join the Wolfpack I love you guys so much Thanks for watching Bye guys [Music]