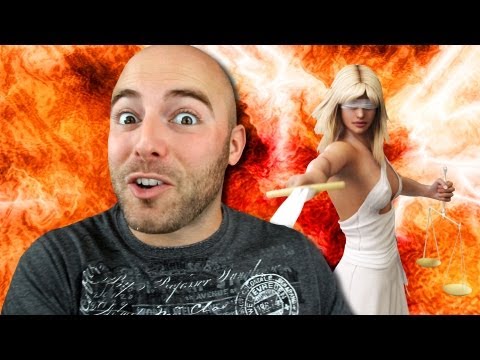 ♫ Bad boys, bad boys, whatcha gonna do? ♫ Whatcha gonna do when they come for you? ♫ Na-has, na-has, na-has, na-hey – I don't know the rest of the words So, recently I've been thinking about doing some more traveling, but part of doing traveling to other countries and things like that, is doing research, not only about what you should bring to the country, but to be aware of the laws of the country you're going to And as I was doing this research, I came across some websites that warn you about the various laws that you're supposed to be aware of before you enter some countries, and after reading these, I was basically just like "I'm gonna just stay home" So I gathered up the 10 craziest laws in the world to share with you guys

So here they are It's illegal to wear a bullet-proof vest while committing a crime in New Jersey In New Jersey, if you plan on committing a crime, like, say, murder, robbery, kidnapping, or pretty much anything else, don't wear a bullet-proof vest, 'cause, you know, after all, you wouldn't want to break the law Seriously, who's this going to deter? If you're already committed to the idea of robbing a bank, I'm pretty sure you're more concerned about a bullet through the chest than you are about the charge for wearing the bullet-proof vest, unless you're some sort of, like, you know, ethical thug So that's how you rob a bank? A'ight

I'm ready to do this! What? Bullet-proof vests are illegal? Well, damn! The whole thing's off then We don't wanna get in trouble, ain't that right, Dolly? We don't wanna disappoint mama Traffic fines as a percentage of income in Finland Traffic fines in Finland aren't fixed, like the rest of the world Instead, they're based on the driver's income as welll as the severity of the offense

There are multiple cases of wealthy people that have been charged tens, hundreds of thousands and yes, even millions of dollars in traffic fines I know this might sound crazy to some of you, but believe me, I live in Canada, and we need this law in North America 'Cause think about it! It's always the rich guy in the Audi or the BMW that's driving like a maniac Instead of giving him a 300 dollar fine, which is nothing, let's give him a 300,000 dollar fine, and then see how fast he likes to go in his fancy car Time to tear up the road in my expensive new car! (thumping techno) Yellow margarine is illegal in Missouri

This antiquated law from the 19th century somehow has survived till today Nobody really knows why this law exists They think that it could have something to do with protecting butter-making farmers way back in the day, but regardless, it could land you a half a year in jail today Speaking of margarine, I got some right here only five dollars! – [Voiceover] This is the police! Put down the yellow margarine! – Aw, damn, gotta get rid of the evidence! Oh, mama, no! Oh, mama, no! (crying) It's illegal to die in the House of Parliament in the UK In the UK, it's illegal to die in the House of Parliament because it's a royal palace, and anyone who dies within it is entitled to a state funeral

The law goes as far as to say that if you even look a little bit sickly, they will physically carry you out of the building Man, that seem pretty excessive Like, I get that the government doesn't want to shell out that much money for a state funeral for just anybody, but how often does someone just croak on the spot? God forbid you should cough Get the bastard! Singapore has a ban on publicly chewing gum It's only available in pharmacies and only for personal consumption at home, or for theraputic purposes, whatever that means

The ban on gum occurred after authorities started to notice discarded gum piling up at subway stations, on roads, and pretty much everywhere else This really sucks, though Like, I get that it's a sticky situation for everybody, but the authorities clearly didn't chew the facts before spitting out their decision I guess they just don't care that they popped the bubble for gum makers You can legally marry the dead in France

Yep! In France, you can legally marry a dead person, as long as you were engaged to them before they died This one's just all kinds of wrong, like, who would ever actually go through with this? Even if you wanted to, you would forever be known as that crazy guy or girl who married their dead fiance! Don't be too surprised, though, because France is known for having all kind of crazy laws, like up until February of this year, it was still illegal for women to wear pants in France! So, marrying a dead guy is fine, ladies, but don't even think about wearing trousers while doing it, 'cause that would just be wrong Kissing in public is illegal in Dubai In fact, any display of affection, including kissing is illegal in the United Arab Emirates There are plenty of stories of couples from the UK and North America who vacation there, only to spend a month in jail because they simply kissed! Even something as simple as dancing can get you jailed

See, this is why, as luxurious as Dubai is, I would never go there The things that I like to do on vacation are just too crazy for them, like: holding hands, or kissing, or dancing naked with a chicken while throwing Skittles at people, you know, regular guy stuff Driving a dirty car is illegal in Russia In Moscow, it's illegal to drive a dirty car Now, just how dirty is not defined, but not being able to see the license plate or the driver will definitely get you a ticket

Really, Russia? Are dirty cars the worst of your worries? Russia has three times as many homicides as the US every single year, so you would think that maybe, I don't know, preventing murders or finding the murderers would be a bigger priority than, I don't know, keeping gas station car washes in business? I'm just saying Being fat is illegal in Japan In 2009, Japanese law-makers set the maximum waist size for men over 40 at 33 inches, and for women over 40, at 35 inches You know, I get that having less obese people puts less of a strain on the health system, but for this reason alone, I could never live in Japan Like, I'm not overweight or anything, but I have trouble controlling myself at all-you-can-eat sushi bars here in Canada

If I lived in Japan, where sushi is cheap and plentiful, I would weigh probably 500 pounds, and permanently be in a sushi coma Mm, sushi coma And possibly the strangest of all, Tibetan monks need permission to reincarnate A law created by the Chinese government in 2007 requires that Tibetan monks ask permission from the Chinese government before reincarnating I know China can be a pretty strict place sometimes, but how do they plan on policing this? It's like all they're trying to do is piss off the Buddhist monks, which isn't gonna work anyways, 'cause they've got the whole zen thing going on

The guy who created this law should definitely be worried, because I know that Buddhist monks don't practice revenge, but that doesn't mean that they can't accidentally come back as a seagull and accidentally drop three or four hundred black and white turds all over you Accidentally And that's it, guys I hope you like this video If you want to learn more about like all the crazy laws out there, just do a simple Google search, they're all out there and there's other really crazy ones that I didn't have time for in this video

So definitely do that, and I will see you next Saturday with a brand new video! Peace (video game achievement music) Hey guys, thanks for watching my video! If you enjoyed it, please remember to click the subscribe button to subscribe to my channel I release a new video every single Saturday, and while you're at it, click the like button and share this on Facebook, and if you've already done those things, then, I don't know, maybe be reincarnated as a seagull? 'Cause I'm sure you've got someone you'd like to take a dump on You know, not revenge, just, you know, it'd be a shame if they accidentally got pooped on