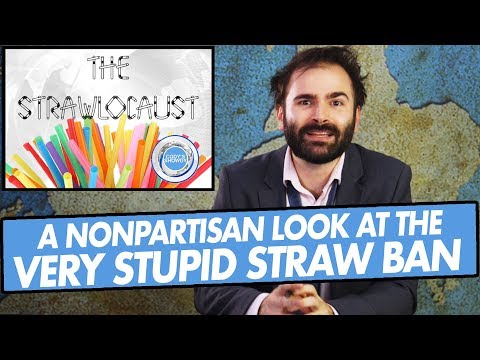 Here's a hot scoop of news Everyone hates straws now

In an effort to cut down on plastic products and dollop on that easy goodwill, Scores of companies are publicly vowing against using straws and other plastics in a bare minimum effort to reduce ocean waste Starbucks is removing their plastic straws and then replacing them with other plastic lids, those heroes

Ikea has promised to stop selling single-use plastic plates and utensils by 2020, presumably due to the exhaustive two-year process of removing items from shelves Royal Caribbean cruise lines- a floating party barge that craps directly into the ocean- celebrated World Oceans Day by vowing to ban plastic straws from their ships And even SeaWorld- a company that literally kidnaps ocean creatures and forces them to perform tricks and tiny sea jails- has banned plastic from their parks Parks that, I can't stress this enough- Literally kidnap ocean creatures and force them to perform tricks in tiny sea jails [music] Anywho, me here at Cody's Showdy, also likes people liking us, as in me

So me has decided to also ban plastic straws in the making of this show Fake off-camera persons, can we get like a PR friendly graphic to show our commitment to this cause? Perfect We're doing great work here Now, look, you're probably wondering why I'm coming down so hard on this minimal, but maybe helpful effort from these companies I mean any effort is better than no effort right? To quote everyone justifying a corporate Earth Day stunt- "At least we're making awareness

" They might not actually know how to fix the problem But their inane bumbling shows they want to Like repeatedly punching someone in the neck because you don't know CPR Or bringing a shoddy submersible child silo to a cave rescue before calling the actual rescue team pedophiles for rejecting it You might not be helping them and are in fact making things worse, but at least you're raising awareness of the problem

[music] So, let's look at this plastic straw ban, starting with the fact that every news organization starts with the claim that we throw away half a billion straws a year Now, that seems credible So where did that number come from? According to LA Times, "It's not clear that number came from, but it seems credible" The number is even being used in legislation proposing a straw ban in California So it must come from somewhere

The EPA or some study on manufacturing perhaps We wouldn't be putting this much effort into banning straws if we didn't have some concrete scientific evidence identifying straws as the primary ocean pollutantrrrright? I mean, this half a billion figure is so commonplace that even children are using it as a statistic Because we use a lot of straws every day in the US alone, about 500 million Which means that they must be learning in schools Because that's how children get complex scientific information Adults carry out studies and draw conclusions and then we teach that to our children in schools

It's not the other way around Can we agree that it's not the other way around? I bring this up because according to what little research into the matter there is that half a billion number came from a nine-year-old child In fact, it came from the same nine-year-old child I just showed you in the clip, after he conducted a telephone survey of straw companies That's it That's the source And look, kids are fine, I guess

And that specific kid is totally awesome for spearheading an environmental movement at such a young age But we shouldn't be basing legislation and policy off of some tiny guy's childhood telephone surveyright? Like that's not a controversial thing to say? Is it? [music] Because while straws do pollute the oceans, they aren't even close to the primary pollutant According to non-children experts, the biggest sea enemies are things like non point source pollution, or pollution from rainfall or snow melt carrying things like pesticides and engine oil into waterways In terms of actual commercial plastics, the biggest culprits are discarded fishing equipment and micro plastics Which are the microbeads you find in makeup and personal care products- the latter we've actually taken steps to address- but no one really talks about the lost fishing gear that makes up 10% of all ocean waste, or 12,000 tonnes of rubbery soft baits left at the bottom of lakes and rivers or the fact that the National Marine Fisheries Service reported an average of 11 whales per year found entangled in discarded fishing nets on the west coast alone Because people want to help- but not in any complex or boring ways

*Actually* helping is a time-consuming and meticulous process So it's much easier to help in a way that makes *us* feel better, but doesn't actually do much So instead of addressing things like the fishing industry or limiting pesticides or keeping tabs on logging and mining companies that might be increasing erosion and chemical drainagewe're just banning plastic straws Straws that, by the way, are extremely important tools for people with disabilities

An establishment not having straws often makes the difference between a person being able to drink and possible dehydration And if you're thinking that there are many reusable non plastic straw options out there for people with mobility issues Maybe remember that they have mobility issues and might not be able to wash reusable straws And so far all our other disposable non plastic options fall apart much faster than plastic options So, when you take into account that plastic straws don't actually contribute a huge amount to ocean pollution compared to other products and industries, it kind of seems like we should just let disabled people have the ability to consume water You know, that that, that thing we need tooo Survive [music] So when you look at all the factors here, not only is this push against plastic straws a completely empty gesture by a bunch of PR hungry corporations, but it might actually be making things worse And not just for people with disabilities but like for the freaking, environment

See, part of this push means that we're going to be replacing a lot of plastic with paper products And we all know that paper is more biodegradable than plastic and therefore better on the environment That's why grocery stores give you the morally superior option of a paper bag But guess ****ing what, Cool Jack?! That entire idea only considers the waste side of the process, and when you factor in the carbon footprint that comes from manufacturing paper products, suddenly, the issue is far less black-and-white It turns out that paper is actually a resource-heavy material to make A paper cup uses 580 times more wastewater to make than a Styrofoam one

On the flip side, plastic manufacturing leaves a substantially reduced impact When one food company swapped their cardboard boxes for plastic ones, they calculated a 70% reduction in their carbon footprint Depending on how many times you use them, it can actually be worse for the environment to use paper bags, tote bags or even ceramic mugs instead of a plastic equivalent You heard me That scene in Ghost where they **** clay was anti-environment propaganda

My goal here isn't to demonize paper or support plastic, but rather point out the situation is far more complex than we'd like it to be And so ultimately, a handful of companies making it harder for disabled people to have straws because of a child statistic isn't worthy of even a fraction of praise If they are trying to raise awareness then, perhaps, we should use this moment to be aware that IKEA once got caught logging wood from ancient forests in Russia No doubt displacing thousands of angry ghosts Or perhaps we should be aware that one Royal Caribbean ship puts out carbon emissions equal to 83,600 cars, and sulfur dioxide equal to 376,000,000 cars

Or, that they produce a daily average of 170,000 gallons of wastewater dumped into the ocean Or, that the air pollution on a cruise ship is worse than most cities Or, that cruise ship emissions are substantially lowering quality of life in Hong Kong and Venice And, when the companies promised to reduce their emissions, a follow-up study showed that none of them actually did that thing With Royal Caribbean- a company that owns the largest and most polluting cruise ship in the world- placing dead last in that study But hey, at least they banned plastic straws, so

Yay, Happy World Oceans Day, a couple of months ago There you go

ocean Have a gold f***ing star from all of us at Garbage Shark Cruise Line Also take this Godzilla wad of condoms and beer bottles, you worthless ****ing biome I'm sure you'll have no problem swallowing our lust runoff, and decadence husks, now that we defeated straws for you, ocean [music] So, if sticking it to disabled people with straw bans doesn't actually make a difference, what should we not-disabled folk do to help the situation? Honestly, the answer is boring and includes the word vote, because the people who can do the most impact are the ones in charge of making government policy For example back in the 1950s and 60s, smog was literally killing people

New York was covered in trash, and living in Los Angeles required owning a gas mask, likeyou know, like, like dystopias But then this tree f***ing hippie came along by the name of Richard Nixon And created something called the Environmental Protection Agency He also supported the Clean Air Act, knowing that it was politically popular to want to save the physical place in which everything, including politics, exists People are generally pro 'being alive'

So it wasn't a hard stance to take at the time Cut to some decades later, and some other bleeding-heart flower urchin namedGeorge H W Bush

not only ran on environmental issues, but was then elected and went on to actually act on his promises by adding stricter amendments designed to further reduce emissions And since those measures were taken, we've actually seen results, and we can keep seeing results unless you know like

Like, some insipid maniac with dumb brain thoughts comes along and begins undoing all the work his own political party accomplished, for grotesquely self-serving reasons While everyone else quietly stands on the sidelines watching the environment get ****ed like a bunch of beta earth cucks But hey, if making sure we can physically survive in the place we all live is now a partisan issue, where only a select group of politicians want the place we all live in to not slowly die

Then at least that makes voting a hell of a lot easier Right? Like maybe it's not straws we need to ban But the people claiming to represent us who are instead making greedy decisions designed to hurt the place we live

Also maybe stop traveling via floating amusement parks Like, when you take a step back, it's kind of an insane thing we're just allowing to happen We're just firing spit wads directly into Poseidon's wet asshole With our straws! But also the infinite garbage that is not straws Okay, later Gator

Hello and welcome to the end where I say thank you for watching and please subscribe to our channel and leave comments and like it And also go to our Patreoncom/SomeMoreNews, and listen to our podcast Even More News, and that is actually it