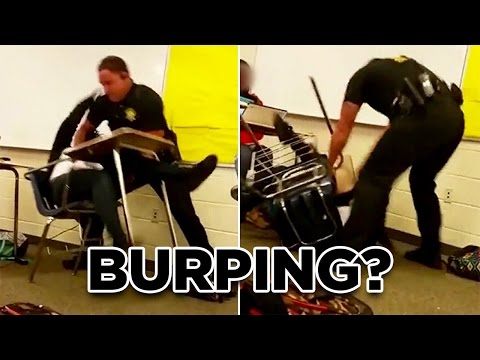 Schools across America now have the added security of police officers roaming the hallways, but has this led to a criminalization of students? From being arrested for burping, to inventing, and even playing tag, AllTime10s brings you the 10 dumbest reasons for students to get arrested 10) Idle Thumbs The Justice Department opened a civil rights investigation after an African-American teenager was violently arrested

Her crime? Texting during class The incident began when the teenager refused to hand her phone to her teacher, who in turn called in school officer Ben Fields, in an attempt to punish the student But when the officer couldn’t get the student to leave her seat, he decided to do it for her, lifting her from her desk, before flipping her backwards and tossing her across the room to cuff her Video footage of the ordeal was uploaded online by the girl’s classmates, who had recorded the arrest on their cell phones, ironically After footage of the arrest became public, officer Fields was suspended without pay, while his boss, Sheriff Leon Lott, told reporters that the attack made him ’sick to his stomach’

Source: Daily Mail 9) Mastur Who? Dirty words are all the rage at school, but did you know that a few misplaced letters could get you arrested? Kaitlyn Booth was working on her school’s yearbook when she decided to prank fellow student Raigan Mastain by changing her last name to Masturbate Unfortunately for 17-year-old Booth, her yearbook prank backfired, and as punishment for her prank she ended up being arrested for property damage and harassment As the mistake was only brought to the teacher’s attention once the 720 yearbooks had been printed, Booth was accused of causing the school $41,000 of damage – the amount it would have cost to reprint all the books In an attempt to rectify the mistake, teachers spent 12 hours placing stickers over the x-rated word Source: Columbia Tribune, NY Daily News 8) Touch At Recess The classic playground game ‘tag’ requires little kids to run around and touch each other

But sticking to the rules didn’t end well for a 6-year-old boy in a Californian school, when playing tag with a classmate led to him being arrested for sexual assault The six year old had been chasing his best friend when he was accused of touching the friend’s upper thigh and groin The ‘guilty’ child was taken to the principal’s office, where he was held for two hours before confessing to his ‘crimes’, at which point he was charged with sexual battery The child’s parents were alerted, at which point lawyers got involved They revealed that it wasn’t even possible to legally charge a child as young as 6 of sexual assault… especially if they were just playing tag

Source: Daily Mail 7) Beaten by a 5 year old Described as a ‘big ball of energy’ by his mum, 5-year-old ADHD sufferer Michael Davis was having a whale of a time at school when his teachers attempted to calm him down Instead of bringing in a behavior specialist, the school district decided to enlist the help of the school police to scare Michael into being still But it didn’t work, and when the police officer took Michael’s hand in his, the boy pushed him away and kicked him in the knee Not one for being beaten by a 5 year old, the officer retaliated by binding Michael’s hands and feet with zip ties and placing him under arrest for battery of a police officer Without speaking to Michael’s parents, the officer then took Michael to a psychiatric hospital for evaluation

Michael’s wrists were still bound more than 2 hours later, when his parents were eventually notified The case was met with disbelief in the city of Stockton, USA, and the charge was dropped Source: Daily Mail 6) Icy Reception Two public schools officers in Detroit were accused of having a personal vendetta against 16 year old special needs student Dominique Rondeau, when he spent 40 days in custody after being accused of throwing a snowball against their police car Police officers Freddy Wilson and Floyd Jenkins claimed to have video evidence of Rondeau hurling the chunk of snow outside his high school Later that night, the officers – still riled up over the winter prank – entered Rondeau’s home without a warrant and arrested and charged him for malicious destruction of property

Rondeau’s bail was set at $2,000, a figure that his family just couldn’t afford, meaning the teenager had no choice but to spend more than a month in jail, missing Christmas and New Year’s Not to mention the months of school he was forced to miss waiting for the trial to reach court After almost a year of turmoil, the case was eventually dismissed when it was revealed in court that the accusing police actually had no evidence against Rondeau Source: The Guardian 5) Spilt Milk They say don’t cry over spilt milk, but what if seems to be stolen? Teenager Ryan Turk was arrested and charged with larceny after he was accused of stealing a carton of milk from his school’s cafeteria Despite being on the school’s free meals program, Turk forgot his milk the first time he went round the queue for food, so doubled back to pick up a carton

However, the school’s police officer saw him cutting the queue and accused him of stealing the drink Turk was handcuffed and taken to the principal’s office with an accusation of milk stealing The authorities took no chances with the milk and decided to also search him for drugs Despite the milk being worth a grand total of 65 cents, Turk is set to stand trial late 2016 Source: Daily Mail 4) Clock Boy In 2015, 13-year-old Ahmed Mohamed gained international attention when his homemade clock was mistaken for a hoax bomb, leading to his arrest

Ahmed had built the digital clock using scrap household items and brought it into school in an attempt to impress his teachers Although Ahmed had a reputation for bringing elaborate devices into school, his English teacher was not impressed, and after hearing the clock beep they called the local police The clock was confiscated and Ahmed was arrested for trying to cause a bomb scare After more than an hour of questioning, Ahmed was let go Although he wasn’t charged for a crime, news of the arrest went viral

Ahmed was encouraged to keep inventing, gaining high profile supporters including President Obama, Hillary Clinton, and Mark Zuckerberg In response to his arrest, Ahmed’s family filed a lawsuit against the school earlier this year Source: BBC 3) Gassed Up Burping is a natural bodily function, but someone forgot to tell the teachers of Cleveland middle school in the US, when they arrested a 13 year old student for doing just that The student got into trouble during his physical education class, when he let out a series of deliberate burps to make his classmates laugh His teacher sent the boy into the hallway as a punishment, but the burping boy couldn’t be stopped and continued to disrupt the class from the corridor

The issue of burping is taken so seriously by the school that their law enforcement officer was called in to deal with the child The burps didn’t stop until the gassy teenager was handcuffed and taken to a juvenile detention center Shockingly, the boy’s clowning around saw him suspended for the rest of the school year Source: The Guardian 2) Cake Gate All she wanted was a slice of cake But what should have been a sugary treat turned into a sour experience when 16 year old Pleajhai [plee-jay] Mervin was arrested for dropping her snack

Evidently not a fan of Hansel and Gretel, the school’s security guard repeatedly made Mervin clean the lunchroom floor where her crumbs had spilled After cleaning the same spot three times, Mervin attempted to leave – but the security guard immediately jumped on her They forced her onto a table, breaking her wrist and calling her a racial slur in the process Pleajhai was expelled from school for 5 days for the incident and charged with battery and littering The classmate that filmed the incident was also arrested

An inquiry into the brawl cleared the security guard of using excessive force Source: Fox 1) Food Fight Food fights are seminal moments in any student’s life, but who could have guessed that a pie to the face could leave you with a criminal record? Well, that is exactly what happened to 25 students at a middle school in Chicago The students, aged between 11 and 15, were in the lunchroom when the antics began An apple was tossed, a cookie was thrown, and an orange bounced off a pupil’s head Dozens of students joined in, while the teachers ran for cover

That’s until the on campus police got involved – and he brought backup 25 of the students that took part were rounded up in the school, arrested, and carted to jail for up to 8 hours for charges of reckless conduct Parents of the charged students criticized the school for what they called the criminalization of their own pupils Source: NY Times