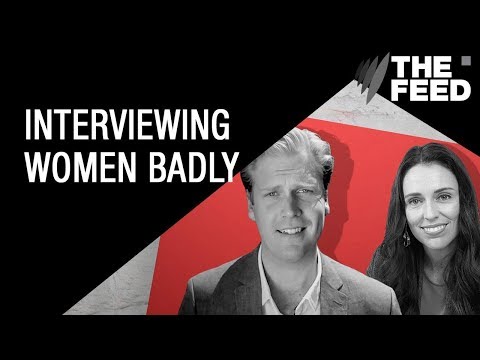 it was a masterclass I’ve met a lot of Prime Ministers in my time but none so young not too many so smart and never one so attractive While lesser journalists would skip over the bangability of a leader Wooley puts that front and centre, and that’s why I look up to him

What exactly is the date the baby's due? The 17th of June The 17th? It’s interesting how much people have been counting back to the conception, as it were

Really? My old journalism professor told me "the best question a journalist can ask is ‘Why’?" And I think the second best question you can ask is "When did you bang?" Not to be tooting my own horn but I think my interview with Jacinda was pretty insightful too Now of course it would be inappropriate of me to ask what position the child was conceived in But I’ve lost my clipboard, and that’s all I can think of The key to interviewing is preparation So before I interview any accomplished woman I always refer to my list of questions that have nothing to do with her job

I’ve found that all of these topics are relevant in interviews with any woman Which is weird, because I’d never ask a man about any of this bullshit Dawn Fraser, Australian swimming legend and winner of four Olympic gold medals You’ve really committed to that haircut, haven’t you? Now, Sheryl Sandberg, we know you like to Lean In but what do you Fit In? Let’s talk waist sizes Ms Gillard, what do you say to people who say I think you’re kind of hot? I’ve been lucky enough to meet some of the most powerful and influential women in the world and ask them which 'Sex and the City' girl they are

I was actually the last person to interview Mother Teresa before she passed I’ll never forget the weight of responsibility on my shoulders that day But I've gotta say, I think it’s some of my best work Alright, 'fuck marry kill' let’s do this My advice for anyone interviewing powerful women? Never forget the 5 W’s of journalism

Who, What, When, Where and Why Who are you wearing? What diet are you on? When did you fall pregnant? Where is your husband? And Why am I asking this?