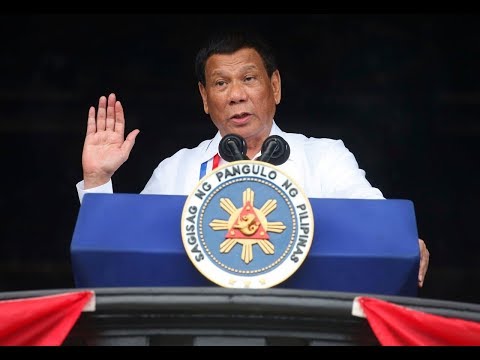 After cursing the pope, the European Union and the United Nations, the Philippines’ controversial president, Rodrigo Duterte, has now lashed out at “stupid” God, sparking outrage in his majority Catholic nation    Mr Duterte provoked the latest furore when he questioned the Biblical story of creation in a televised speech, asking why God had created Adam and Eve only to allow them to cave in to temptation    “Who is this stupid God?” said the 73-year-old president in his usual blunt style “How can you rationalise a God? Do you believe?” he asked viewers in Asia’s largest Catholic country    The reaction to the presidential rant from leading bishops and senators was swift and damning    The president was a “madman,” charged Bishop Arturo Bastes, urging his flock to pray for an end to Mr Duterte’s “blasphemous utterances and dictatorial tendencies,” reported the AP    The president’s “tirade against God and the Bible reveals again that he is a psychological freak, a psychopath, an abnormal mind who should not have been elected as president of our civilised and Christian nation,” he added    Antonio Trillanes, an opposition senator, described Mr Duterte as “one evil man”, retorting that his comments were “very much consistent with the deceitfulness, heartlessness and ruthlessness of his policies ” Profile | Rodrigo Duterte  The Duterte administration on Monday remained defiant in the face of escalating criticism, attempting to turn the tables on the Catholic Church by demanding it deal with the wrongdoings of priests    “I think the declaration of the president stemmed from his bad experience when still young He was allegedly abused by a priest,” presidential spokesman Harry Roque told GMA News “This is an issue that the Church should face and perhaps it just happened that the president is one of the victims ”  He added: "The Church cannot forget this It should admit and ask forgiveness so that all the victims, including President Duterte, can also move on with their lives ” In quotes | Rodrigo Duterte, President of the Philippines  Salvador Panelo, the chief presidential legal counsel, claimed the president did not insult God but was just questioning Christianity's theory of creation He insisted that Mr Duterte had the right to express his views on religion, reported the Philippine Star    "He didn’t call God stupid

What he said was the theory of creation as expounded by the writers of the Bible is a stupid proposition,” he said in a statement    But the spat comes amid increasing tension between President Duterte and leaders of the Catholic Church who have criticised his brutal war on drugs    The murder of three priests since December has also given rise to fears that members of the clergy have been deliberately targeted for their stance on human rights    The church and political leaders have condemned the “culture of impunity” that has flourished during the country’s war on drugs, and which they suspect may have paved the way for the killings    "We should be alarmed," Father Jerome Secillano, a spokesman of the Catholic Bishops' Conference of the Philippines (CBCP), said in an interview with Al Jazeera in early June    "Killing is a form of violence We do not want violence to permeate in our society We want a violence-free society We want our citizens to be freely roaming around, with a sense of security and safety "