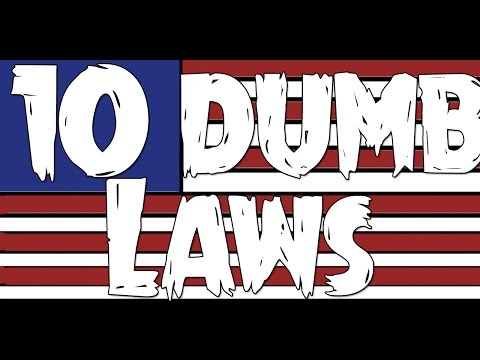 A "grouch" presents, 10 dumb laws around the US that someone is probably dealing with, right now Kentucky – You know those urges you get when you want to paint your lawn a different color? I know I get those all the time

If you're like me, and live in the state of Kentucky, you might want to think about moving because it is illegal to paint your lawn the color RED Weirdly enough, there is no law preventing you from painting it a different color such as BLUE or maybe WHITE or maybe BLACK FOR YOUR RITUAL SACRIFICES TO THE DARK LORD VOLDEMORT My guess is whoever made this law probably entered some sort of best yard contest and probably lost Utah – If you are ever at a funeral paying your last respects to someone who's passed you'd better hope you don't stub your toe on your way to the coffin because it is illegal to swear in front of a dead person in Utah This is probably to prevent them from rising up from the dead and hunting you down later

Alabama – In the state of Alabama it is illegal for a driver to be blindfolded while driving a vehicle You know those times when you're just on your way to work and you're feeling so confident that day in your driving skills, memory of the maps of the roads, and your heightened other senses, that you decide to put on a FUCKING blindfold while driving? NO? ME NEITHER New York – In New York the penalty for jumping off a building is DEATH Suicide is never cool and that's exactly what this law is trying to enforce After all, we wouldn't want you to DIE OR ANYTHING

Kentucky – In the state of Kentucky it is illegal to carry an ice cream cone in your pocket Now, do i really need to explain this law? This law just has crime written all over it You could say, it even SCREAMS crime Arizona – In the state of Arizona, if a burglar or criminal ever attacks you, you may only defend yourself with a weapon that is the same as is being used against yourself So if for example a burglar who breaks into your house comes equipped with a flamethrower, and all you have is Shotgun, you'd better drop that shotgun because, after all, you wouldn't want to break the law

Maryland – This law would have been PERSONALLY devastating for me, remember way back when when the movie "The Lion King" was showing in movie theatres all around the world? I remember it, and so does my pet lion, Mufasa I'm glad i wasn't living in Baltimore, Maryland at the time because it is illegal to take a LION into the Cinema Mufasa would've been devastated Not to mention I would had to take my giraffe, Morty He's kind of a dick

Texas – In Texas, if youre going to commit a crime, you legally have to 24 hours notice to the police about the crime you're going to commit WELL THAT'S HELPFUL AIN'T IT I could see why they would pass this law, I mean like there's a criminal and hes trying to do a crime and when you give information to the police you know that kinda defeats the purpose so its like WHY Two points for Texas

Well what do you know, Texas again In Texas it is illegal to shoot a buffalo from the second story of a Hotel

Wait, what? Washington – In the state of Washington it is illegal to harass Bigfoot Yes, fucking Bigfoot

That is actually a thing Although the law was passed as an April Fools Joke, it is technically a real law My advise is if you ever plan on visiting, just stay away from anyone who's 8 feet tall and really hairy That's it for this countdown, if you know what I should be counting down next, leave a comment down below and I might make a video on it Also please leave a like if you enjoyed and subscribe for future videos