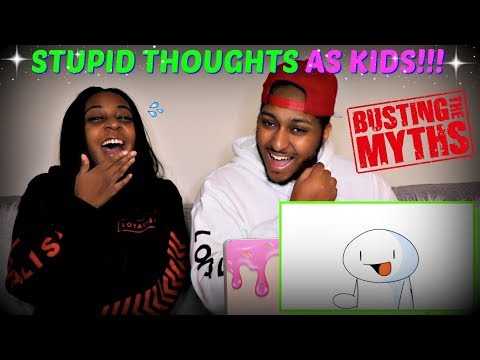 Dwayne: How is it going today, Loyalists Jasmine: Loyalists Dwayne: Kingdom D: My name is Dwayne

J: My name is Jasmine D: We're Dwayne and Jazz D: Today we have, "Odd1sOut – Stupid Things [My Sister] Believed as a Kid" J: I believed a lot of stuff D: Me too J: I'll say that then though D: If you guys have any reactions for us, please follow us on all of our social media links down below

D: And don't forget to- J: Subscribe D: And by the *inaudible* the link you got 7 days left! D: Here cop the 'Scarlett Night' and White Knight 20 J: Yes D: Let's dive on in James: So I was thinking of video ideas when I thought I could talk about stupid things I believed as a kid James: But the only thing I could really think of was the fact that I thought I ate too many bananas James: I would turn into a monkey And I didn't want that to happen so stopped eating bananas Sense so I asked my twin sister whose name is fate By the way you should remember anything I believe she couldn't think of anything about me, but gave plenty of examples about things she So here we go for the sake of comedy I'm going to exploit my twin sister

Yes stupid things my sister believed desiccated Wow Older sister who's like eight nine years old and she told my sister that computer could talk back to us They're typing Computer an error message popped up she asked my older sister What was wrong with it? And she said the computer says you're typing on it too hard asked her She was having a phone conversation with an auto regular basis oh Happy day to communicate tell it that I got a hundred percent of my spelling test okay I'm typing it in got it so even It doesn't care another thing is that one time my sister was June water It's a bug a nerd dream She freaked out and poured the water out But my older brother said you know somebody Sibley's you have since you were drinking water You could see in the bug But you changed something like Milk you wouldn't see it So the Skype desert Dan came to us and say come on kids we have to go It's buy one get one free, but he said it kind of fast The one word so he said come on kids

It's why I'm gonna treat We're like what's the bond with you agree You know? My sister asked me to buy things that bottle doing free my dad was like yeah So she brought her own money the robotic arm Court daddy Get ready when my brother said no I follow delivery There's skeletons that pop out It's still your money, so I thought oh

This is what we do um free is like an outdoor horde place Huh hot air my sister, and she didn't take her money when we got to bombing Yemen free It was just a grocery store and my dad was per mile of the Ceylon milk Am I gonna realize that a lot of these problems exist because no their siblings suck Yes, so this one Yeah, do too You know how sometimes airplanes out of those little smoke trails coming out when we thought that those airplanes were what made clouds all those? Active never seeing a factory with steam stuff coming out, and I thought wow they're making their little cloud, yeah Another funny thing is that my sister believed in the Tooth Fairy I way longer than she believed in Santa Claus That's because my parents didn't make us believe in Santa Claus You know just pretend Santa's real like you know Mickey Mouse Mickey Mouse isn't real Someone dresses up It's Annie goes to Disneyland, which he knows and I like the same thing you know we just Pretend that easier we pretend that it comes to visit us So yeah, we've never really believed in zanoits, but for some reason our parents made us believe in the tooth fairy So yeah, that's about it glad

I didn't believe in stupid crap like my sister I like that Stupid stuff I believe then yes, I know I didn't believe this asshole kids, bro I was bad ten you Enjoy ya told them that Santa Claus was a real boy I think one parent came up to me I know well You're the you're the one that room did that crushes the kids dreams You're the one that the kid comes home because he says you since you said they's like mom it's real I was whispering and inside of that mother let me sing one of the things I Believed in when I was a kid I believe under definitely monsters under my bed, bro No I did too, but it's different, how was it different like you you believe you like the Boogie memory no I just believe it was something just monster under my bed I just felt like and come to find out that it's my parents making noise in the living room Like what kind of noise think might not like not like like just making noise like oh no I don't know think what it's like trying to look Like they would be in a room, but then sometimes my mom, or dad's like leave their room and go downstairs a little Yeah, cuz I can hear it

It's like It was like I don't know what these doing Okay Cards it's better for me I believe in a So the monsters and Ben thing I thought I had vampires and anything don't ask me why I thought specifically it was vampire I just thought that it was a Vampire underneath there with his sharp fangs waiting for me a good on their secrets suck my blood so I did not Like that I believe that my dolls got up in night and started walking around as once again Chucky, okay? Yeah I believe that very much because I would wake up and they're in a disposition like I knew it exactly where my stuff was so Like when I've seen a disposition I'll be like Whoa and I'll be staring at down like Like watch you move later Fight from the breath oh, I know you don't know that man Yeah, no But I used to believe that I used to believe in I used to believe in all the Tooth Fairy the Easter Bunny I found out Easter Bunny wasn't real just because my mom was caught in a lie that I was fixing up so I saw that you know how they hide the Easter baskets I saw the two Easter baskets before Easter Inside of the computer room in the closet and so when I saw that it was like it was like hidden And it was like in a drawer, and I saw it I was like And so then I tested my mom and I was I went to my mom I was like mom I need the stapler for one of my school projects I can't find it, and she was like oh, we're just looking at computer

Oh, and I said oh, okay? I'm gonna go look in the drawer, and I just said give her a hint that I'm gonna Go there so as soon as I said it enjoy she like kind of paused a little bit It's just like oh no it's not in there It's not in there It's not in the drawer go um Go look downstairs and stuff like that so like that that confirmed I was just thinking my mind I was like But I I thought it was cause my parents were so good at hiding stuff like the tooth fairy Like I was upstairs one time when I lost my chill I put it underneath there Now went downstairs my mom was there

I went back upstairs, and then there was a quarter there I don't know how she did that to magic magic I don't know how she does that but I was just like What if your mom was really to that time? That's why I believed you I was like how ever did that happen then my mom finally told me one day It wasn't real I was like we all do some fast work Because I went upstairs at one time it came in now that you didn't move and that thing was up I don't know how you did My dad secretly wimpy window and put it through there and then got back out cuz he wasn't there So anyway guys don't forget to like this

Over 50s tips that are dating locate a partner with us