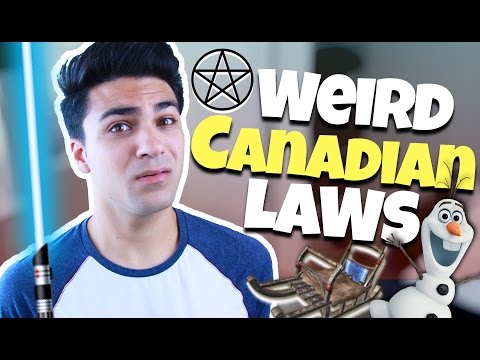 What's going on guys it's Daniel So I'm a huge fan of Joe santagato, you probably know who he is

Hilarious guy And he has a series called Weirdest laws in the US And it got me thinking, I'm like are there any weird laws that are here in canada? And yes by the way i do live in Canada If you didn't know I live here in Toronto I am Canadian Eh I don't actually say eh though Before we go any further if you're not already already subscribe to this channel click that subscribe button down there because I do make new videos every week and if you liked the video so far or throughout you like what you're hearing give the video a thumbs up because you know it helps me out

But I thought that some of these laws would be like it's illegal to bump into someone and not apologize and say sorry, or its illegal to ride your dog sled on the sidewalk Oh what? Oh that's an actual? That's an actual law Okay See? Its an actual law in the Northwest Territories So I did some research and I found some weird, strange Canadian laws Not as good as America, I got to say, but there's still some interesting ones Let me tel ya So yeah like I said in the intro it is illegal to ride your dog sled on the sidewalk in the Northwest Territories

I can only imagine the cops are riding on their dog slide trying to chase after the guy who's on the sidewalk riding his I don't know though I do know that its really cold up there and i also do know that this law probably doesn't help the fact that a lot of people think that we all ride dog sleds in Canada So yeah, this law doesn't really help us Thanks Northwest Territories This is a nation wide law: it is illegal to pretend to practice witchcraft So the Canadian government is acknowledging the fact that witchcraft is a real thing

That people can actually cast spells That Sabrina the Teenage Witch Harry Potter, the Genie from Aladdin: they're all real That's real You can cast a spell and change someone from a human being into a pile of shit So on Halloween you can't dress up as Harry Potter or a witch and pretend to cast a spell

Duels are illegal in Canada, you can go to jail for two years Two full years for challenging someone to a lightsaber duel In Alberta it is illegal to set fire to the leg of a wooden legged person Yes One day Rick with the wooden leg gets you really pissed off and you're thinking you know what I'm gonna get that son of a bitch back I'm gonna burn his damn leg I'm gonna burn his wooden leg to the ground

But that actually happened for this law to be in effect Someone's wooden leg got burned Probably more than once What's going on in Alberta there? Do a lot of people have wooden legs in Alberta? So this one here was a good one In Etobicoke you can't have more than three inches of water in your bathtub I mean I don't know how the hell they're gonna track this dumb law because what's gonna happen? Your neighbor is going to call the police Uh Hi there 911 I just saw that my neighbor was taking a bath, I was peeking through the window, and I think I have more than three inches of water in the bathtub

Can someone go check that out? Then while you're sitting there in the bathtub was like a candle going probably and like a champagne glass in your hand Cause that's what everyone does when they take a bath, right? You hear a knock at the door and it's a police officer and they're like excuse me we've heard that you're taking a bath with possibly more than three inches of water We need to come inspect that What? Who knew that staying clean could be so dangerous In Souris Prince Edward Island it is illegal for a snowman to be over 30 inches I can just imagine parents raising a kid in this city They're like okay Bobby you can't say a bad words don't pull people's hair and don't build snowmen over 30 inches All right? Don't do those things Or else you'll go to jail You know how they have those volunteer police officers, like the ones who do like community type stuff, I can imagine them they're the ones who are walking around neighborhoods with like a tape measure and going to measure every snowman on someone's lawn They're like oh 26

So you know there I am Daniel Coz on his horse in Alberta It's a beautiful day it's a hot day I'm feeling a little parched So I see the local 7-eleven and I gallop on over to that 7 11 and then I get to the front of the building and I realize holy shit there's no place to meet a tie-up my There's no place for me to tie-up Bullseye Bullseye! But thats a law