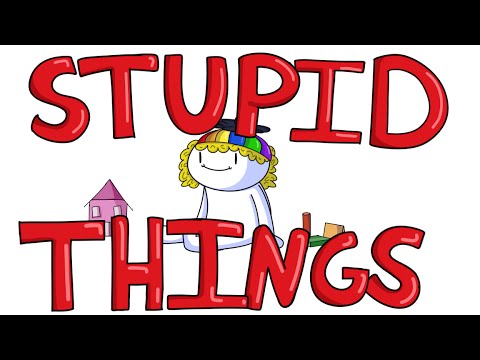 So I was thinking of video ideas, when I thought I could talk about Stupid Things I believed as a kid But the only thing I could really think of was the fact that I thought If I ate too many bananas, I would turn into a monkey

And I didn't want that to happen, so I stopped eating bananas and have grown a distaste to them ever since So I asked my twin sister, who's name's Faith by the way, If she could remember anything I believed She couldn't think of anything about me, but, gave plenty of examples about things she believed So here we go, for the sake of comedy I'm gonna exploit my twin sister Stupid Things my sister believed as a kid

but not anymore So we have this older sister who was like eight, no 9 years older than us And she told my sister that, the computer could talk back to us through typing It happened because Faith was on the computer, an error message popped up

She asked my older sister what was wrong with it And she said, "The computer says you're typing on it too hard," Faith asked her to tell the computer she was sorry And soon she was having a full on conversation with it, on a regular basis But the older sister would have to be there to communicate Tell him I got a 100 percent on my spelling test! Okay, I'm typing it in! SRHJIKLJKGHGHJHK What did it say? It says it DOESN'T CARE

Another thing, was that one time my sister was drinking water and saw a bug in her drink She freaked out and poured the water out But my older brother said, You know something scary? Since you were drinking water, you could see the bug But if you drink something like uhh, milk? You wouldn't see it *whisper* Because milk isn't clear like water

We were waiting in the car for Dad to get ready, When my brother said, you know, At Buyonegetonefree, there's skeletons that pop out and steal your money So I thought, Oh! this buyonegetonefree is like an outdoor horror place huh? And that scared my sister, and she didn't take her money When we got to buyonegetonefree, it was just a GROCERY STORE! And my Dad was excited about the sale on milk You know, I'm beginning to realize that a lot of these problems exist because older siblings suck So this one I believed in too

You know how sometimes airplanes have those little smoke trails coming out? What we thought, that those airplanes were what made clouds All those clouds Just a bunch of airplanes And I remember seeing a factory with steam stuff coming out, and I thought, wow That's a very big cloud maker

Another funny thing is that my sister believed in the Tooth Fairy, way longer than she believed in Santa Claus That's because my parents didn't make us believe in Santa Claus You know, we just pretend Santa's real, like You know Mickey Mouse? Mickey Mouse isn't real You know how like, someone dresses up as him, and goes to Disneyland Well, it's kinda like the same thing, and you know we just pretend that he's real We PRETEND that he comes and visits us every night, you know We just pretend So yeah, we never really believed in Santa Claus, but for some reason, our parents made us believe in the Tooth Fairy! So yeah, that's about it Glad i didn't believe in some stupid crap like my sister