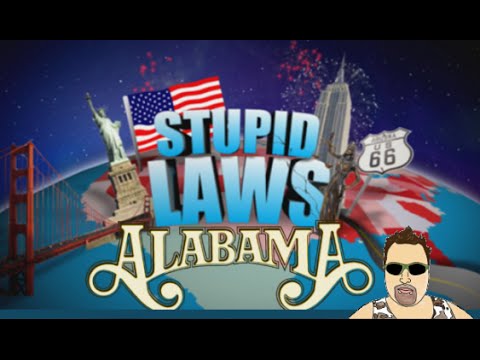 What's going on y'all Commander here, to talk about stupid laws and blue lawsThese are freakin hilarious

I had to do it! I am probably going to do every State starting with Alabama I�ll be working in alphabetical order Yeah there's going to be plenty more of this, it's going to be funBut, yeah! Stupid laws like blue lawsBlue laws is another term for it

Or dumb laws Anyways let's get started Number one: This is the state of Alabama You may not have an ice cream cone in your back pocket, at anytime What the hell? What the hell does that have to do with anything

Right? Why would anybody want to do that right? You would get your pocket all messy You would be covered in ice cream It would be a mess Number two: Masks may not be worn in public! So, I guess Halloween costumes are out right? Can't do that in the state of Alabama! You at least can't wear a mask with your costume Which kind of sucks because, that eliminates half the costumes out there

Number three: It is considered an offense to open an umbrella on a street for fear of spooking horses What the hell do horses have against umbrellas? LOL I kind of want to go try this and open up an umbrella near a horse, real quick and see what the hell happens All right! Number of four: Women are able to retain property they owned prior to marriage In case of a divorce, However, this provision does not apply to men That's crazy so I guess the guys out of luck

He ain't getting his s*** back! That seems fair right! LOL! Number five: It is illegal to sell peanuts in Lee County after sun down, on a Wednesday That is crazy! That is s***** for someone that is a peanut salesman That would suck for them I don't know anybody personally that sells peanuts but, that would piss me off! What if I am trying to buy peanuts after sun down? What if I am on a mission To go get me some peanuts and I can't get it after Sundown? That would be ridiculous! I would be so pissed off

You better stock up on Tuesday! Number six: It is illegal to be blindfolded while operating a vehicle Well no s*** Sherlock! LOL! Like who the hell would want to drive a vehicle while but being blindfolded, unless they had some kind of a death wish Number seven: dominoes are not to be played on Sunday! That's crazy! That doesn't make any sense! Not that I like to play dominoes but, if I was a dominoes player that would piss me off That is insane and does not make any sense But, none of these laws are supposed to make sense But yeah that's the funny part about it

Number eight: It is illegal to wear a fake mustache that causes laughter in church Are you serious that's actually a law? Why would you need a fake mustache? Like what the hell, just grow that s*** I mean does this just apply to kids Laws for minors that cannot grow a mustache That's crazy! LOL! Number nine: Putting salt on a railroad track may be punishable by death! No s***? what the hell? what the hell does that even do? Does that really do anything? Maybe it would? I don't know what salt does Maybe salt does something with metal and makes it rust

Damn you get caught putting salt on a railroad track you are screwed You going to be hanging! LOL! Or get that electric chair or some s***! That's crazy! Damn don't do that in Alabama! Number Ten: It is legal, it's actually legal, to drive the wrong way down a street if you have a lantern attached to your vehicle So, headlights don't work! Don't use headlights! You need a lantern because, that makes sense right? That's crazy ya�ll! So that's the blue laws of Alabama! Stupid laws! For the state of Alabama As far as I know these are still in effect I don't know how well these are enforced

Probably not enforced this day and age This is freakin hilarious! So we're going to be doing more Of these We're going state by state We will be going alphabetically! This will be fun! Anyways put a like on the video If you enjoyed it! Subscribe if you haven't already I'll see y'all later, peace out!