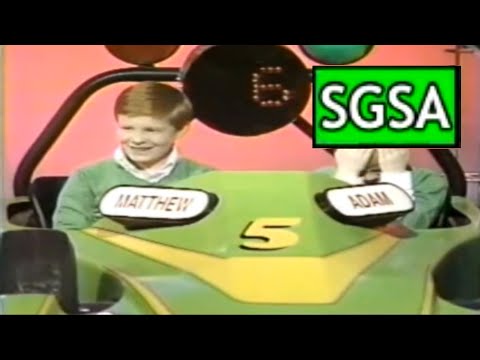 (SGSA Music plays) I'm gonna play a prank on my dad Pay attention to which can I shake, and where it ends up Which can did I shake up? Can I just say that that's virtually impossible? So- so Victoria, in other words you think you did well? Yeah, definitely, exactly what I meant (laughs)

Yeah, I typed in "1234" So you have a 1/4 chance of getting right So I got- I definetly got it In 1869, the man's name was OA North, he invented something that changed the look of your closet forever

Was it moth balls, coat hangers, or the boogeyman? The boogeyman? The boo- (laughs) 16 letters: Embezzlement or other improper use of funds "What is misappropriation?" you don't have enough fingers Barret! When you divide one number by another, what do you call your answer? Less According to studies from foriegn universities, what was the main reason people got married in the middle ages? (spit sound effect) Because, nobody asked them when they were young Um is it something- is it a trick you play on people? No Is it a trick you play on animals? No What kind of cruel pers- Matthew, if Adam would be a character from a storybook, who would he be? Garfield? [Garfield is a Herald Journal comic strip, not a storybook] You say Garfield? Who is Barack Obama? Oh! I know this! Hey, alright then One of the Chuckle Bros [a British stand-up comedy duo] A Moshi Monster character The little boy in Diversity [a British dance group] Or President of the United States