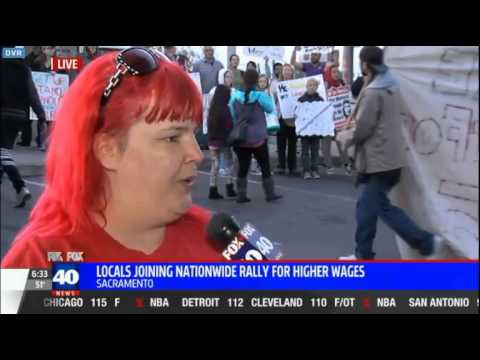 It did in historic legislation just recently passed well now they say the protest can't stop not until workers get $15 minimum wage plus union rights nationwide so that's what they're out here doing there protesting along with 300 other protests going on nationwide including in New York city right now I'm actually here with Holly Diaz you are a worker in mimimum wage worker in the fast food industry Why fight for the nation you've already won? Because I don't just fight for myself I fight for every worker, and if you work you deserve to support your family What do you think this protest will do? its being done in California where you've already won What do you think this is going to do to help nationally changed the minimum wage? We have one California New York has one but there's 52 states so there's 50 more states that need to win and until every worker is able to support their families, and every worker has union rights this is what you won't be expecting

And after you guys leave this protest you will be heading over to the state capital what will be going on there? We are going to be having a program there are many speakers, and we strongly believe it should happen there so the politicians can continue to hear us and let us let them know that we won but it's not over Why shut down this mcdonalds? Cause if they disrespect their employees they don't pay right, and we just picked them because they don't the workers don't deserve what's happening to them Aright thank you so much Like I said after this protest here they're going to be heading over to the state capital where they will be giving more speeches, and they say they want better retirement better, union rights, and they say the fight isn't over in California but they say this fight this protest today is really about changing the minimum wage nationally so that every employee makes fifteen dollars an hour Reporting in Sacramento Kimberly McDougal Fox40 news

I'm just doing the math here that's 52 minus 2, you go ahead i'm just gonna work on this uh-huh 6:34 welcome back everybody it's a big day for the Sacramento Republic