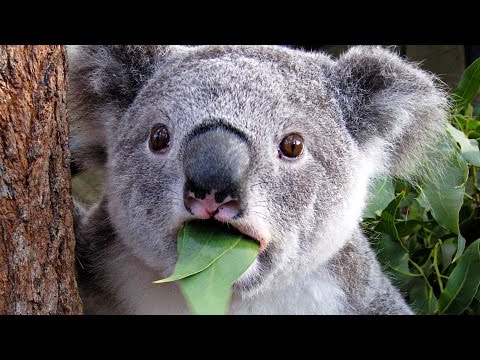 Don't let its suave looks and longing beady eyes fool you into thinking that it's up to something There really is, absolutely nothing, going on in there Scientists have discovered that the beloved koala bear may be the least intelligent mammal on the planet Don't believe me? Look! This one's trying to climb a bloody painting "Oh you guys saw that did you"

They may have large fluffy heads, but a koala brain is tiny, making up just 2% of its body weight, the smallest brain to body-size ratio of any mammal They also have a smooth brain which is evolutionary language for "they're about a million years late to the party" Koalas are so stupid that if you take a few eucalyptus leaves and put them on a plate in front of a koala it won't eat them Because it thinks that if it's not attached to a tree then it can't possibly be food But not only are they stupid, koala bears generally make terrible animals, they're just put together all wrong

Their favourite food is so inadequate that they have to move really slowly to preserve energy Eucalyptus leaves are ridiculously low in nutrients and calories, they need to eat 2,000 leaves a day to survive It's like us humans living entirely off celery, okay your friend at work may have tried that diet for a month, but eventually it's gonna end badly –  Eucalyptus truly is a terrible food It's not even food, eucalyptus leaves do everything they can to make it perfectly clear that they do not want to be eaten Not only are they practically inedible, they're chewier and tougher than your grandma's pork chops

But they are also poisonous But koalas were like "listen boys, we've got this" and dedicated their entire evolutionary history to adapting themselves to be able to digest this toxic plant and not dying afterwards When they could have eaten literally any other food and done considerably better at being animals They get so little energy in fact that they need to sleep 18 hours a day But they're too darn intellectually-deficient to find another food to eat

Eucalyptus is so difficult to digest that it takes four whole days and only adult koalas have sufficiently developed digestive systems to cope with it Baby koalas can't digest the leaves at all, so they eat their own mother's feces, known as "fecal pap" to survive Not only that, but they use their claws to scrape the poop dinner out their mother's anus They may look docile but get on the wrong side of these moronic poop-eating furballs and you'll regret it, in fights they go full-psycho Yet, despite their occasional hissy fit, the koala bear has been named by one animal conservationist as "the most boring of all animals"

Poor little guys And if after all that, you still need more proof that koalas really are the most pathetic and unfortunate animal – about 90% of all koalas have chlamydia, which makes them incontinent, so they spend all day pissing themselves And if you thought this cuddly little misfit couldn't get any weirder this is what they sound like Yeah thanks for watching