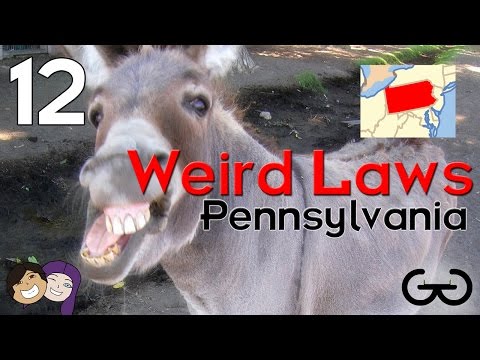 Geeky Gaming Hey Geeks, it’s Andrea and I am here with Josh And today we are counting down Weird Laws again

This time from the great state of Pennsylvania I have a good friend that lives there, so whenever you Geeks suggested this, I definitely wanted to jump on it So, Matt, this video is dedicated to you Alright Geeks, let’s go 12

Let’s kick things off with one that some of you might be guilty of In fact, I know someone that would get in trouble for this one Whether she, or I mean this mystery person rather, would admit to it or not It is against the law to sing in the bathtub in the state of Pennsylvania 11

If you are a housewife, I hope you don’t like being sneaky with your housework There is a cleaning ordinance that bans housewives from hiding dirt and dust under a rug It seems to specify housewife so I guess if you’re a househusband you can hide all the dirt you want But you know what you can’t do? Buy alcohol without a written letter from your wife giving consent

I have a feeling this one isn’t enforced Ever 10 I hope you don’t live in a big family home with a lot of aunts and female cousins or any other women because it is illegal to have over 16 women living in a house together because apparently that means that you’re living in a brothel according to the Pennsylvania law books On the other hand, if you’re a man, you can live with up to 120 other men and it’s all legal

Hopefully it’s a pretty big house though 9 Here is a law I can’t BARE the thought of being enforced In Morrisville, it is illegal for a woman to wear any kind make up without a special permit I guess that’s better than requiring the women of your town to wear makeup

In Connellsville you can wear your makeup, but the fashion police, or just police police, could in theory get you if you wear pants that are lower than 5 inches below the waist Of course, if you are a man not wearing underwear, that may no longer be a theory Keep it in your pants, boys 8 Picture this situation for me

You came home from work Tuesday and tripped over your lawn sprinkler breaking your foot, leg, or whatever you feel like pretending you broke The next day you really need to water your lawn Well, you better not grab a chair and try to keep weight off that leg while using the hose In York, it is illegal to sit down while watering your lawn with a hose 7

Here is a pretty weird one for you In Pittsburgh it is illegal to bring a donkey or a mule onto a trolley car By the way, I may be stupid or something, but I had to look up what a trolley car is What is this adorable little thing? It looks like a train car without tracks or something I want one! But I won’t be able to bring Josh on it, the law says no asses allowed

Sorry Josh 6 If you like to fish, it’s good to know your laws Sure it’s good to know when and where you can fish and if you need a license, but have you considered what you can fish with? Of course the old fishing pole is acceptable, but if you want to really get your hands dirty, you just can’t You may not catch even a single fish with your hands if you want to follow the law

In fact, the only body part that you can actually catch a fish with without breaking the law is your mouth Also if you’re thinking about throwing explosives in the water to catch a fish, you better think again There is a written law against using explosives to catch fish This one makes sense 5

If you’re a young male adult who has an easy time taking the beauty of life in, you really need to keep your head on straight We should probably to inform you that by law men are not allowed to get publicly aroused I’m sure you’re going to be fine, though It has to be a very hard law to enforce I mean an officer isn’t likely to stiff-arm you about your situation

If you are in a car driving along a country road at night, you are required to stop every 10 miles and send up a rocket signal Then you have to wait 10 minutes for any livestock to be removed from the road Here’s hoping you don’t have to drive very far If you are driving at any time of day and see horses coming toward you, you are required to pull off and cover your car with a blanket that will help blend it into the scenery I guess that’s to keep from spooking the horses

But it gets worse If the horse or horses refuse to pass, you are supposed to take your car apart and hide the parts in the bushes I really want to see the car that this is possible with 3 When reading about weird laws, there are always some that were clearly written because of some specific event that in some cases must have been really weird, so here are 4 of those for you

In Ridley Park you aren’t allowed to walk backwards while eating peanuts in front of the Barnstormers Auditorium during a performance Very Specific It is illegal to juggle in front of an airplane in Wellsboro Someone really must have gotten a case of the burps while giving a speech in Hazelton because sipping a carbonated drink while lecturing students in a school auditorium is prohibited by law And somehow the weirdest of all, it is illegal to sleep on top of a refrigerator outdoors

That might be my favorite 2 If your house catches on fire in Danville, you better hope there was a psychic nearby All fire hydrants are required to be checked one hour before all fires I feel like the point of this one is for checkups to be regular and I get that, but… um…

This is impossible? This law probably could have taken a bit more thought 1 If you are interested in being the governor of Pennsylvania sometime in your life, you better keep your temper in check Any person who has participated in a duel is ineligible to be governor I’m not interested in being a politician, so let me just go find my glove to smack someone with

Alright Geeks, that is going to do it for this video I have one quick thing to say before we go This is going to be my last video of the summer because I am heading back to my place several states over In fact, by the time this video is up, I will be back home getting ready for the next school semester Of course Andrea will still be here doing videos for you, but I won’t be able to be in them very often and I just wanted to tell you guys that I enjoyed spending this summer with you

So one last time for my summer break of 2016, do me a favor and subscribe if you haven’t Tell your friends to come join us and like and share the video for us Alright Geeks, have a great one and I’ll see you sometime soon Keep Andrea company for me