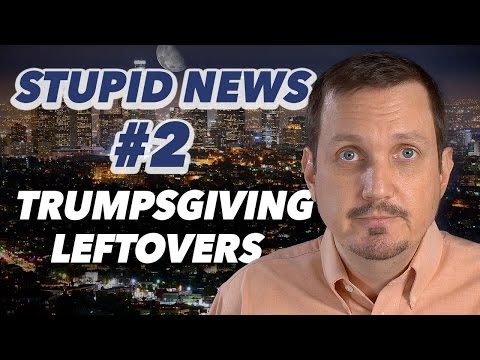 It now appears that Hillary Clinton beat Donald Trump by over 2 million popular votes But you know what they say, winning isn't anything

Hi I'm Ian Dukes, and this is the Stupid News During the presidential campaign, Obama, Romney, and the New York Times all fiercely criticized Donald Trump, but now Trump has made a point to sit down and spend quality time talking with each one of them In response ten-year-old Barron said "I hereby denounce my dad" Last week long time Trump backer Jerry Falwell Jr met with the president-elect to discuss education They agreed it's a serious concern and they hope their supporters never get any

Finally on friday the US stock market hit a new record high Experts say that in 2017 will see even more new highs, especially in California Nevada and Massachusetts And now for a segment we call Deep Facts This week deep facts investigates "How did Donald Trump celebrate thanksgiving? [deep facts] In the spirit of the holiday Trump spent the entire morning volunteering Mike Pence to go help a homeless shelter [deep facts] While gathered with his family Trump retold the story of the pilgrims original celebration and how they made the Native Americans pay for it