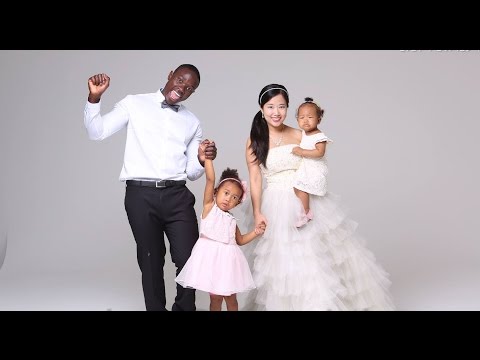 i was just it was weird and interesting you know as an adult your parents are still like, you need approval That was that's just weird I mean Don't you think that's African culture, too? like I know a lot of African guys who can't like go against their parents will and that's very similar I mean it just depends with people maybe if you

if you come from that kind of family, then yeah But, I mean Yeah

I come from that kind of family So, you can't say like, you know you are an adult and that's weird Yeah, that was it was weird

I mean it was just interesting and weird I'm like, huh? I mean as an adult You should be able to do whatever you want to do you know, make your own choices and your parents you know they can't buy you from doing what you want but they can of course they can express their feelings ok we will support this or not, but They can't stand between you and as an adult and what you what I don't know

the whole continent/ it's not just Korean that's just everybody everybody who's in who feel, who think you know they have this thing to say first world, third world that's what a lot of people associate Africa with such It's just not/ Yeah Even American people, right? Yeah It's just not korean people it's just anybody who think / They just don't know anything about Africa actually They really don't know

because I I didn't know anything about African either and I remember I asked him, are there some elevators Are there any elevators in your country? I like I seriously asked him that I really wanted to know because i really thought that Africa might not have that kind of stuff that's basically like what it is like a lot of people don't know about African a lot of people just think that Africa is just really deserted place and you know people are just starving dying there and there's nothing there basically if you say you're from Africa then people might be like Sowhats there right so anyway so that was I think the reason why my parents are against him the most was you know because he's from Africa and obviously we don't know anything about Africa and also you know, Africa is known for poverty and my parents are sort of scared to

just scared basically about that unknown place and this unknown guy from unknown place right? if I am in that my parents situation I will probably act the same way because if you don't know the place and if you don't really know the people you just you know you get scared and you're not you can't be totally just open right away unless you really get to know them and I think my parents got to know you and and that's when they really actually opened up, right? Yeah It's about just how much you want to get to know them and that's it Do you wanna get naked? Do you wanna get naked? Yes the thing is you always see irish pubs like everywhere Thailand and I remember china beijing shanghai seoul even Itaewon the interesting thing is always always it's super crowded right yeah they're always crowded and you see them every where So, this is virginia beach This is just a stretch Oh

That looks nice beef? chicken? smells so good Please try it if you want the chicken skewers are on point They are so good / wow / thank you I always you know make videos of us eating and people are complaining like Hey! you know you guys are making us hungry! So, the main reason why i approached you guys is because you guys have different just like me and Sophia Hi, we just met you guys At best buy we looked at the video

This is a beautiful couple right there Thank you What's your name? / Follow and subscribe! So, I see an African and i would say Asian maybe people would say Chinese but then when they look at me and Sofia they look at ok this african-american with this latina or this Spanish but we us, we are Moroccans /Both of you? / Yes so a lot of people approach us and it's it's it's good it's a good entertainment for us

You know what I mean? It's like, people might hate you at the same time it's a lot of people love you more than hate you It was really strange at first But, we like grew to embrace it you know now we don't care it doesn't bother us anymore But, what's really strange is that here, it's kind of more laid-back and normal and i thought when we went to Morocco, it was gonna be you know completely fine because there's all kinds of different people in Morocco, and all different looks But, that's where we got the most like most stares , most dirty looks things like that / Wow, interesting It was really really weird another funny thing about it is when we were like saying Moroccanish, Morocan

They will talk to me in English thinking I am the American and talk to her in Morocccan like a Moroccan who basically understands Morroccan well she was the one born here Do a lot of Moroccan look like her? Yeah She's a Meditanerean looking girl So, today, we came to a park where Kenyans gather and do barbecue We came to a Kenyan barbecue party Thank you for anybody who came here we thank you for everything We are gonna do this in a Kenyan way, alright? Le'ts go! Kenyan way, alright? OK Go! One! Is that a Kenyan way? I don't know

Yeah! It was him!! You are having fun? Yuri? I really like her dress It's so pretty! nice / Thank you! A quick question, what does it take to vlog, or to be a vlogger? I think it's important to be like unique

everything At the same time, relatable to other people So anybody can become a vlogger / I think so

I think so / As long as you have an interest and passion yeah/ okay / so for example you are from Kenya, right? / Right So, you can talk about like Kenya in America Living in America as a Kenyan I'm sure people who will want to hear your story / Right Right

You know something like that like something that can be relatable also very unique some other Kenyans who live in different countries they might want to hear about your story Cool! / so yeah what's your name? My name is Ben Let it go Yuri singing, too Here they sing They like to sing "their let it go" song I wanna do it again

You wanna do it again? / Yeah ok let it go let it go Yuri singing a song Cold never bother me anyway