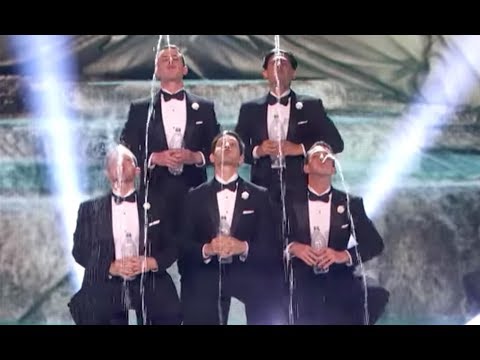 Just when you thought you’ve seen it all, the Human Fountains entered America’s Got Talent  For the quarterfinals, the synchronized spitting men amplified their cringe-worthy act with a hot dog trick that involved spitting a wiener, ketchup and mustard onto a bun and then someone eating it  “How the hell am I supposed to comment on what I just saw? I’ll give this to you: It’s the most stupid act we’ve ever had on the finals of AGT,” Simon Cowell said after giving the water-spewing act a red X  The comedy troupe of five childhood friends explained that they got the idea as high schoolers, trying it on on a driveway before turning it until an entertaining act  “Some people love it, some people are completely grossed out For us, we’re happy with any reaction, because it’s a comedy act and everyone has different reactions to the different comedy acts they like We’re just figuring out a way to get people smile, there’s enough seriousness in most Americans’ lives, so we’re giving them a little break,” member Sam Kaufman told reporters  While Cowell joked that he doesn’t even know how to judge the act, the other judges have been vocal about their feelings  “Honestly, just when I thought it can’t get any more ridiculous, out comes the wiener, out comes the mustard vomit I mean, it’s kind of disgusting

But I kind of like it,” Heidi Klum added  Despite walking away with Simon during the performance, Melanie “Mel B” Brown expressed her admiration for the performers and their innovation  “You know what? You are something to remember You really are You are original and I love the song choice, by the way But you must really love each other that much to share that much Come on

But you know what? You’re original and you will be remembered,” the Spice Girl said  According to Kaufman, the messy performance requires a carpet added to the stage to reduce the cleanup before changing acts  “We’re all from Denver and people are seeing it and we’re having a ball, it’s all about showing the audience something they haven’t seen before and when we do that we’re very happy,” said spitter Ben Tillis  Howie Mandel, who once referred to the act as his “personal nightmare,” offered more positive feedback on their most recent performance  “You guys teach us a lesson Young people are watching And what is the lesson? What is the take-away? Sharing is caring That’s what I like about you”  As for their friendship?  “Most of us all live together, so it’s pretty much eat, sleep and spit water,” joked contestant Joel Lowinger