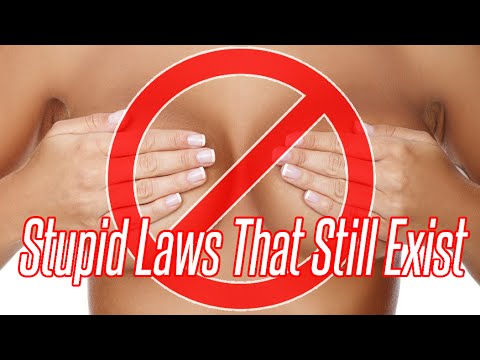 From the death penalty as punishment for attempted suicide, through to where a man can't legally kiss his wife, we're going to discover 15 of America's most stupid laws Number 15

In Alabama, dominoes (cough) dominoes may not be played on a Sunday Number 14 In Arizona, you can do 25 years in prison for cutting down a cactus Number 13 In Connecticut, in order for a pickle to officially be considered a pickle, it must bounce

Number 12 In Florida, it is illegal to sell your children Err, wait that sounds sensible How about, in Florida, you may not kiss your wife's breasts Number 11 In Hawaii, billboards are outlawed Number 10

In Indiana, no one may catch a fish with their bare hands Number 9 While in Kentucky, it is illegal to fish with a bow and arrow Number 8 In Michigan, a woman is not allowed to cut her own hair without her husband's permission

Number 5 In New Jersey, it is illegal to wear a bullet proof vest whilst committing a murder Number 4 In New York, the penalty for jumping off a building is death Number 3

In Texas, one must acknowledge a supreme being before being able to hold public office Number 2 In Washington, it is illegal to pretend that ones parents are rich Number 1 In Wyoming, you may not take a picture of a rabbit from January to April without an official permit