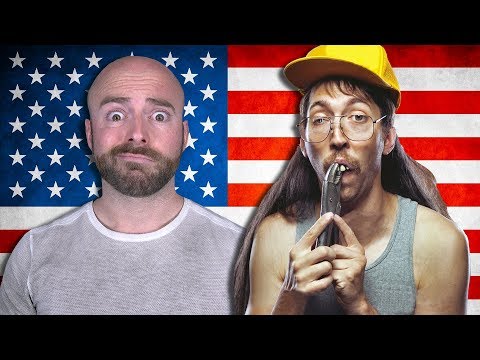 – Hey, let's talk about laws Laws are intended to protect us, you know, keep us in line, because humans are naturally savage

But sometimes, lawmakers go overboard and create laws that are really unnecessary and actually really bizarre and weird Let's talk about those! (donkey braying) (gavel pounding) Here are the 10 most bizarre laws in America Number 10 is it's illegal to drive blindfolded in Alabama Did you really need a law for this one? I don't think so! This commonsense law defies common sense that it even needs to be a law But if the good people in the state legislature in Montgomery are setting a law, someone must've been flying blind down a road in sweet home Alabama

In 2014, the Alabama Department of Motor Vehicles created a new rule for the road It prohibits the obstruction of drivers' view or driving mechanism In other words, at some point, somebody must've been driving down the street with something covering their eyes to be like, "Let's see how fast I can go, yee-haw!" Most of these laws are created just to save ourselves from ourselves Number nine is a woman can't marry the same man four times in Kentucky Kentucky is famous for its purebred horses, namesake music, being bluegrass, and its famous export, bourbon

And that last one might be the reason that lawmakers decided to make this law, 'cause they were just having a little too much Southern belles of Kentucky are free to marry and divorce three different men three times or four men twice, but forget about marrying the same man four times That's a big no-no You know, there's probably some logic to this law because if it didn't work out the first three times, why would you try it a fourth? Some people believe that this law was created to prevent unnecessary divorce proceedings clogging up the courts Although, at the end of the day, if someone wants to marry someone four times, well they should be able to do that

However, it's probably not gonna work out 'cause it's been four times! So, you know, maybe go find someone else that's nice, maybe on a dating website You never know Number eight is it's illegal to sell your eyeballs in Texas They say that Texas is one of the freest states in the United States of America, with its guns, barbecue, and rodeo clowns But one thing that you can't do in the Lone Star state is sell your own eyeballs

Wait, why would you wanna do that? 'Cause you only have two; what? Well, that sounds downright un-American, considering your body is a goldmine full of blood, hair, bodily fluids, and even organs considered nonessential to survive that you could sell off, although I wouldn't recommend it 'cause that's some black market stuff But somebody at some point must've tried, because Texas Penal Code 4802, set into law in 2009, prohibits the sale of human organs, including kidneys, livers, hearts, and of course those beautiful peepers Those found guilty of this can face up to a year in county jail, plus a $4,000 fine But for Texans still tempted to harvest your own organs, you are allowed to sell your hair and blood plasma

I'd also like to mention that this is just a misdemeanor; that's it, for selling your eyeballs! What's wrong with you people?! Number seven is trick-or-treating is illegal after 12 years old in Virginia I mean, is this one really so bad? Do you really want someone like me walking up and being like, "Trick or treat, I'm so lonely"? Virginia may be for lovers, but it's certainly not for teenagers on Halloween night, where kids older than 12 are forbidden from trick-or-treating As little ghosts, ghouls, and goblins terrorize their neighborhoods for candy, it's the Virginia teenagers who are considered the real monsters Various city codes have legally restricted them since the 1970s from trick-or-treating Cheapskate teens who break the law can be subject to $100 fines and even six months in jail

Considered a Class 4 misdemeanor, the laws are surprisingly difficult to enforce but are seen as a way to curb the tricks, such as vandalism, egging, and TPing Well, you can stop me from trick-or-treating, but you can't stop me from dressing up on Halloween You know, I'm always gonna go out as Christopher Walken It's crazy! It's creepy Number six are no couches on porches in Boulder, Colorado

You'd think that Colorado, one of the most libertarian states in the nation that was the first to sell recreational marijuana would let you put your couch wherever the heck you want But not in Boulder, Colorado, where a sofa ordinance is in full effect on University Hill near the University of Colorado campus Get off your porch, no sitting there! It's the devil! Now, the law may sound ridiculous at first, but the Boulder students have a tendency to light easily-accessible furniture found on porches on fire late at night after parties Believe it or not, incidents have led to vehicles and homes catching on fire in the dry, fire-prone region So, the city controls the top-tiered academic pyromaniacs by issuing $100 citations for first-time offenders

" Mustache laws were passed in states and municipalities all over the United States during the 18th and 19th centuries to govern the tidiness of men's facial hair Mustache discrimination was commonplace throughout the early 20th century, with men actually found guilty of contempt And a Washington, DC firefighter actually won the right to keep his 'stache and job, thanks to the District of Columbia Human Rights Act

However, the Eureka law still discriminates against horny hipsters and old-timey saloon proprietors, but it is no longer enforced So, all you criminal mustachioed masterminds with your handlebar or curlicues can grab your girl and cry out, "Eureka!" (smooching) Number four is minors can't play pinball in South Carolina Tommy the Pinball Wizard from The Who's classic 1975 double album couldn't have become the arcade wonderkid in South Carolina, where minors aren't allowed to play Now, this law is of course ridiculous and arcane But back in the day of penny arcades, pinball machines dispensed tickets and tokens that could be redeemed for cash and prizes

So, technically, playing pinball was gambling and an arcade was akin to a casino, so many states adopted similar measures to protect children from vice and depravity By the mid-1970s, various US courts ruled that pinball was a game of skill, unlike a slot machine So, the pinball law requiring an ID to play was, of course, nullified across the country, including South Carolina, yet the law still stands on the books "Hey kid, you wanna play some pinball? "Give me some quarters, we'll make it happen" (laughing) Number three is that donkeys can't sleep in bathtubs in Kingman, Arizona

This crazy law kind of makes an ass out of Arizonians because donkeys have been banned from sleeping in bathtubs since 1924 Why you gotta be discriminatory? Them asses gotta clean themselves too! Nobody likes a dirty ass Clean ass Ass jokes But besides the obvious queries, like why would a donkey sleep in a bathtub and how would it even fit, there is actually historical precedent for this law

In Kingman, Arizona, a rancher had a spoiled donkey who preferred napping in a tub to the drafty old barn But then, a dam broke, flooding the town and surrounding the area, including the rancher's land, taking his precious donkey down the wash into the basin After the town devoted considerable resources and manpower to rescue the donkey in its porcelain sleeping quarters, they enacted the law banning donkeys from sleeping in bathtubs after 7 pm So, I guess before then it's okay

Logic, not the strongest suit of a lotta lawmakers, clearly Number two is bear wrestling matches are outlawed in Alabama Leave it to Alabama to show up twice in one video with their weird laws, like this one that prohibits the unlawful bear exploitation, which is good, except it also includes wrestling bears In the time before Facebook, YouTube, and Netflix, Alabamans got their thrills at county fairs, watching bear wrestling matches, either bear versus bear or, yes, you guessed it, bear versus man Promoters of these matches claimed bears were natural wrestlers, with their ability to stand on their hind legs and their brute strength was a marvel of nature

But of course, it was next-level animal cruelty, which is not okay You treat them animals nice! In May of 1996, the Alabama Senate voted unanimously to ban bear wrestling for profit, so therefore surgically altering a bear or training it to wrestle is now a Class B felony But, and this one's just gonna twist your mind, Alabamans can still legally wrestle a bear in the wild on the bear's own terms "(growling) You wanna go? "You're in my world now (growling)" And number is one is you can be arrested for harassing Big Foot in Skamania County, Washington

Well, this one's just the cherry on the crazy cake Big Foot must have one heck of a lawyer, because he has the law on his side in the gun-happy Pacific Northwest, where you can go to jail for one year if you shoot him Granted, there's no scientific proof that Big Foot actually exists But, hey, why not have a law protecting him, huh? The Sasquatch, which is Native American language for large, hairy man-monster, was first sighted in 1811 in Alberta, Canada, and has been seen across North America, especially in Skamania County The county commissioners, concerned with all the heavily-armed paranormal hunters visiting, declared a Sasquatch protection and refugee area in 1984

And believe it or not, it was even followed in 1991 by neighboring Whatcom County and its one-million-plus acres "Sir, we've got a lotta issues today, "what do you wanna handle first?" "Save the Big Foot!" So, those are the 10 most bizarre laws in America But if you enjoyed this, remember to give it a big thumbs-up Also, be sure to subscribe to my channel and turn on notifications by clicking the bell beside the subscribe button so that you don't miss a thing, because I release new videos all the time Thank you guys for watching and I'll see you next time

Make sure to keep your ass clean (record scratching) Donkey Keep your donkey clean in the bathtub Anyway, bye!